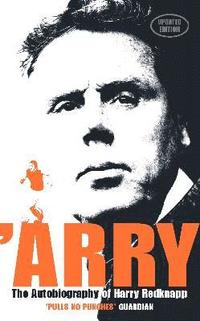 av Harry Redknapp, Derek McGovern
Häftad Engelska, 1999-10-01
139
Köp
Spara som favorit
Skickas inom 3-6 vardagar.
Fri frakt inom Sverige över 159 kr för privatpersoner.
The hugely entertaining autobiography of one of the most popular and highly respected managers in the English Football League. Mention West Ham United FC and the name Harry Redknapp immediately springs to mind. The Hammers' boss is an institution in the game; his experience of English football in the Nineties from the perspective of one club is unsurpassed. His was a controversial appointment, as he took over as manager at West Ham in 1994 to succeed former favourite Billy Bonds. But Redknapp broke the mould: he was one of the first Premiership managers to recruit heavily from abroad, and he gives a refreshing insight into how such players as Raducioiu, Dani, Boogers and other foreign buys adjusted - or in many cases, failed - to adapt to the frenetic pace and unique culture of English football. More recently he has proved a shrewd investor in British talent. The likes of Trevor Sinclair, Neil Ruddock and Ian Wright have ensured that the Hammers have been a force to be reckoned with throughout this season's Premiership campaign. Away from football, Redknapp recalls his narrow escape from a near-fatal car accident in 1990 and the unique relationship with son Jamie, a quality player for Liverpool and England who is now married to pop star Louise. In an extra chapter to the original hardback edition, Harry comments on the Hammers' performance during the 1998-99 season, and reveals the truth behind the many colourful and often controversial incidents that have beset the East End club in recent months.
Visa hela texten

East End born Harry Redknapp played on the West Ham wing for six years prior to moving to Bournemouth. He led the Cherries to the Third Division title in 1987 and became manager there before accepting the role of assistant manager at West Ham in 1992. He became manager at Upton Park in 1994. Derek McGovern is the former Chief Sports Writer of the Racing Post. His elder brother Jimmy is one of the best-known scriptwriters on television (Hillsborough, Cracker and The Lakes). "(Redknapp) does not so much wear his heart on his sleeve but thrust it pulsing into the reader's face" The Independent "Essential reading" Total Sport