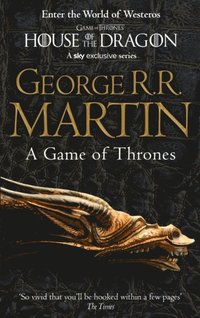 A Game of Thrones

Book 1 of A Song of Ice and Fire

Winter can last a lifetime. And the struggle for the Iron Throne has begun. As Warden of the North, Lord Eddard Stark counts it a curse when King Robert bestows on him the office of the Hand.

His honour weighs him down at court where a true man does what he will, not what he must ... and a dead enemy is a thing of beauty. The old gods have no power in the south, Stark's family is split and there is treachery at court.

Worse, the vengeance-mad heir of the deposed Dragon King has grown to maturity in exile in the Free Cities. He claims the Iron Throne.
Visa hela texten

`Of those who work in the grand epic fantasy tradition, Martin is by far the best'Time Magazine`Colossal, staggering... Martin captures all the intoxicating complexity of the Wars of the Roses or Imperial Rome'SFX`The sheer-mind-boggling scope of this epic has sent other fantasy writers away shaking their heads ... Its ambition: to construct the Twelve Caesars of fantasy fiction, with characters so venomous they could eat the Borgias'Guardian

George R.R. Martin is the author of fourteen novels, including five volumes of A SONG OF ICE AND FIRE, several collections of short stories and numerous screen plays for television drama and feature films. He lives in Santa Fe, New Mexico