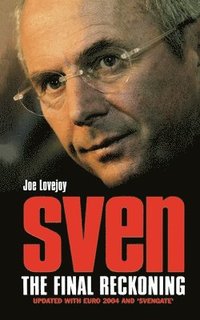 av Joe Lovejoy
Häftad Engelska, 2004-09-01
209
Köp
Spara som favorit
Skickas inom 3-6 vardagar.
Fri frakt inom Sverige för privatpersoner.
A major in-depth biography of Sven-Goran Eriksson - the first foreign manager of the England football team - which chronicles his time in the hot seat, from taking over from Kevin Keegan, the story of the 2002 World Cup Finals in Japan and South Korea, through to the 2004 European Championships. Reserved - some would say introvert - by nature, he has so far dismissed as intrusive almost all questions about anything other than the England team. There is a fascinating story to be told about the moderate full-back who failed in his own country, retired from playing at 27, then went on to become one of the best coaches in the world. The son of a truck driver from a small provincial town in Sweden, Eriksson left school early and worked in a social security office. He went to college to study PE and played football as an amateur before being persuaded by an older teammate Tord Grip (now his assistant with England) that his career lay elsewhere in management. Modest success at Roma and Fiorentina was followed by a renewal of Sampdoria's fortunes. It wasn't long before Lazio came knocking - but not before an acrimonious fallout with Blackburn when his surprise about-turn left the Lancashire club without a new manager. He enjoyed phenomenal success in Rome, however, where he led Lazio to the scudetto, and this eventually paved the way to the England manager's job. Since then Eriksson has come under the microscope from the English press, as much for his private affairs as for his team's stuttering performances. Despite his achievements in leading England to the quarter-finals of the World Cup in 2002, his methods, formations and team selections are the subject of fierce debate up and down the country. Joe Lovejoy's book captures the essence of the man and goes some way to explaining his influence behind England. This paperback edition explores his thoughts about his captain playing his football in Spain and documents England's rocky road to the 2004 European Championship finals.
Visa hela texten

'A thorough and methodical biography ... ' FourFourTwo 'A perceptive and thorough analysis of the man and his style' The Observer

Sven-Goran Eriksson was born in Torsby in 1948. He played amateur football in the Swedish Third Division, before becoming manager at IFK Gothenburg, with whom he won the UEFA Cup. After spells with Benifica, Roma and Fiorentina, he moved to Sampdoria and then Lazio, whom he led to the scudetto in 1999. He was made England coach in Oct 2000. Joe Lovejoy is the acclaimed football correspondent of The Sunday Times and Football Writer of the Year for 2000.