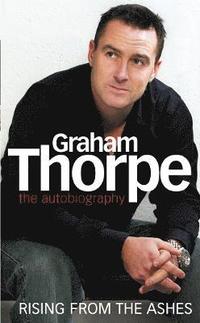 Rising from the Ashes

av Graham Thorpe
Häftad Engelska, 2006-06-01
189
Köp
Spara som favorit
Skickas inom 3-6 vardagar.
Fri frakt inom Sverige för privatpersoner.
Graham Thorpe's achievements on the cricket field contrasted wildly with his personal problems, where drink and depression combined to send him spiralling off the rails. This is his brutally honest life story, including his dramatic retirement from Test cricket, and updated to include England's 2005 Ashes win, and his new coaching career. Graham Thorpe was one of the best batsmen in world cricket for more than a decade. Yet the national press hounded him as 'English cricket's most disturbed player' for pulling out of a series of tours and turning his back on the game more than once. With painful candour and often unexpected humour, Thorpe dissects his career in cricket and the inner recesses of his private life: the impact of his bitter divorce; the suicidal depression that afflicted him in his darkest hours; the reasons why he needed to 'save himself' by withdrawing from past England tours; the elation of his magnificent century on his comeback Test at the Oval in 2003; and his fresh outlook in life with a new partner after confronting his own failings and past troubles. Twelve years on from his Test debut against Australia, Thorpe took the decision to retire from international cricket after the disappointment of his controversial non-selection for the Ashes 2005 tour. With updated material on his coaching spell in Australia - where he gained valuable insight into cricket's No 1 nation - his new-found media role and his still-relevant views on where English cricket is heading post-Ashes 2005, Thorpe will continue to be an important figure in the game for years to come.
Visa hela texten

'An absorbing read' The Sunday Times 'Seldom have I read a more revealing book about the psychological disintegration of a sportsman...immeasurably superior to the usual ghosted autobiographies' Observer Sport Monthly 'A searing story, told with unflinching honesty' Guardian

Graham Thorpe was born in August 1969. A lifelong middle-order batsman for Surrey CCC, he scored a century on his England Test debut against the Australians in 1993 and has been at the forefront of world cricket ever since, having played over 90 Tests and scored 15 Test hundreds. He retired from cricket in the summer of 2005. Simon Wilde is the chief cricket writer on the The Sunday Times.