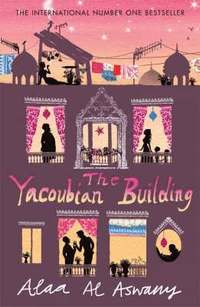 av Alaa Al Aswany
(3 röster)
Häftad Engelska, 2007-09-01
119
Köp
Spara som favorit
Finns även som
Visa alla 2 format & utgåvor
This exceptional Egyptian novel - as mesmerising as it is controversial - caused an unprecedented stir when it was first published in Arabic. Welcome to the Yacoubian Building, Cairo: once grand, now dilapidated, and full of stories and passion. Some live in squalor on its rooftop while others inhabit the faded glory of its apartments and offices. Within these walls religious fervour jostles with promiscuity; bribery with bliss; modern life with ancient culture. At ground level, Taha, the doorman's son, harbours career aspirations and romantic dreams - but when these are dashed by unyielding corruption, hope turns to bitterness, with devastating consequences. Alaa Al Aswany's superb novel about Egypt's many contradictions is at once an impassioned celebration and a ruthless dissection of a society dominated by dishonesty.
Visa hela texten

'A superbly crafted feat of storytelling.' Sunday Telegraph 'An intriguing and highly charged novel...Alaa Al Aswany's eponymous structure is a microcosm of modern Egyptian society...Al Aswany manages to capture the challenges facing much of the developing world...a superbly crafted feat of storytelling.' Tash Aw, Daily Telegraph 'A sharp, humorous novel.' Caroline Moorhead, Spectator 'Addictively readable...The most emotionally compelling Egyptian novel published in English since Naguib Mahfouz's "Cairo Trilogy".' Indendent 'It's not hard to see why this Egyptian novel has created a furore in the Arab world...It's a fabulous, acutely observed story of human foibles, full of vivid scenes and extraordinary characters.' Mail on Sunday 'The stories in this novel are beautifully, simply told - the characters are alive from page one.' Sunday Times 'There are many stories here. The book is elaborate to bursting point, but always controlled, always whole. It is as juicy and satisfying as a shiny apple, its taste both strange and familiar, compassionate and bitter.' The Times 'In its affectionate portrait of feckless and flawed humanity, this is a rich and engaging book; in its analysis of the Islamist threat, it is a brave and indispensable one.' Daily Mail 'With its parade of big-city characters, both ludicrous and tender, its warm heart and political indignation, it belongs to a literary tradition that goes back to the 1840s, to Eugene Sue and Charles Dickens...The plotting is neat, the episodes are funny and sad, and there are deaths and weddings aplenty.' Guardian 'Bewitching.' Scotsman 'Al Aswany is excellent on the bitterness young Egyptians feel towards a country where hard-won qualifications are worthless unless backed with money...an absorbing portrait of the struggle to survive in the Arab world's "best friend of the West".' Observer

Alaa Al Aswany was born in 1957. A dentist whose first office was in the Yacoubian Building, he has written prolifically for Egyptian newspapers across the political spectrum on literature, politics and social issues. 'The Yacoubian Building' is his second novel.