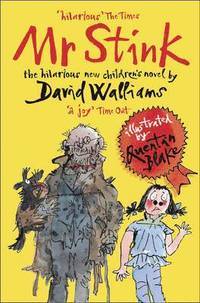 av David Walliams
(1 röst)
Häftad Engelska, 2010-05-27
99
Köp
Spara som favorit
Kan levereras innan julafton!
Finns även som
Visa alla 4 format & utgåvor
The second original, touching, twisted, and most of all hilarious novel for children from David Walliams, number one bestseller and fastest growing children's author in the country - beautifully illustrated by Quentin Blake. "Mr Stink stank. He also stunk. And if it was correct English to say he stinked, then he stinked as well..." It all starts when Chloe makes friends with Mr Stink, the local tramp. Yes, he smells a bit. But when it looks like he might be driven out of town, Chloe decides to hide him in the garden shed. Now Chloe's got to make sure no one finds out her secret. And speaking of secrets, there just might be more to Mr Stink than meets the eye... or the nose.
Visa hela texten

"A pleasure to read. A beguilingly funny, original and thought-provoking tale... hilarious" Amanda Craig, The Times "The story is an inventive joy." - The Daily Telegraph "a delight from start to finish... a new Roald Dahl" - The Times

David Walliams has revolutionised reading for children and has become one of the most influential children's writers today. Since the publication of his ground-breaking first novel, The Boy in the Dress (2008), Walliams has seen unprecedented growth with global sales exceeding 45 million copies, and his books translated into 55 languages. Collectively across his titles, David has celebrated 70 weeks (non-consecutive) at number one in the overall book charts and more than 200 weeks (non-consecutive) at number one in the Children's charts - an achievement no other children's writer has reached. Quentin Blake taught at the Royal College of Art, where he was Head of the Illustration Department before becoming a full time illustrator. He has collaborated with writers such as Russell Hoban, John Yeoman, and most famously Roald Dahl. He has also illustrated classic books for adults and created much-loved characters of his own such as Mr Magnolia and Mrs Armitage.