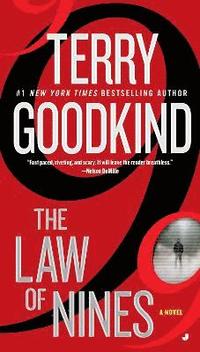 The Law of Nines

av Terry Goodkind
Häftad Engelska, 2015-05-21
169
Köp
Spara som favorit
Skickas inom 5-8 vardagar.
Fri frakt inom Sverige för privatpersoner.
Kan levereras innan jul!
Finns även som
Visa alla 2 format & utgåvor
The #1 New York Times bestselling author delivers a stunningly original , high-octane thriller. 'Your mother was twenty-seven when it came to her. Now you're twenty-seven, and it's come to you.' The skin of Alex's arms tingled with goosebumps. By her twenty-seventh birthday insanity had come to his mother ... Turning twenty-seven may be terrifying for some, but for Alex, a struggling artist living in the mid-western United States, it's cataclysmic. Inheriting a huge expanse of land should have made him a rich and happy man; but something about this birthday, his name, and the beautiful woman whose life he just saved, has suddenly made him - and everyone he loves - into a target. A target for extreme and uncompromising violence... Where do you turn when your own reflection spells doom? In Alex, Terry Goodkind, the NEW YORK TIMES #1 bestselling author, brings to life a modern hero in a whole new kind of stunningly original, high-octane, page-turning thriller.
Visa hela texten

Goodkind was born and raised in Omaha, Nebraska, where he also attended art school, one of his many interests on the way to becoming a writer. Besides a career in wildlife art, he has been a cabinet maker, violin maker, and he has done restoration work on rare and exotic artifacts from around the world - each with its own story to tell, he says. In 1983 Goodkind moved to the forested mountains he loves. There, in the woods near the ocean, he built the house where he and his wife, Jeri, live, and came at last to tell his own stories.