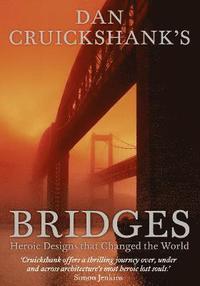 Heroic Designs That Changed the World

av Dan Cruickshank
Inbunden Engelska, 2010-10-28
279
Bevaka
Spara som favorit
Tillfälligt slut – klicka "Bevaka" för att få ett mejl så fort boken går att köpa igen.
Finns även som
Visa alla 1 format & utgåvor
Dan Cruickshank's personal, passionate and learned journey into the very awe-inspiring architectural icons which have transformed culture, society, industry and landscapes throughout the world - bridges. Bridges define places. Imagine San Francisco without the Golden Gate Bridge, Manhattan without the Brooklyn Bridge, or Sydney without Sydney Harbour Bridge. Not only this, but they are spectacles of engineering, and have influenced the development of cultures, economies, environments and lives in more ways than we can count. Now, Dan Cruickshank looks at what bridges mean to us, and draws on some of his personal favourites from all over the world to tell the story of their architectural, cultural and aesthetic influence. Chapters include: EMPIRE - Bridges from the Roman and ancient world NATURE AGAINST NATURE -Timber bridges REVOLUTION - Pioneering structural designs from North America and Europe UNITING PEOPLE - Bringing nations, cities, and communities together VISIONS - Contemporary structures
Visa hela texten

"... even if some of us find it tricky to stare at Roman stones for hours on end without our eyes beginning to droop, we are glad to know that good old Dan Cruickshank could stare at them until the cows came home - and even then, he would probably start trying to get the cows to share his enthusiasm." He also celebrates the book's "beautiful production" and "awe-inspiring colour photographs." Mail on Sunday, book of the week * January issue of Scottish Field: "All you ever need to know about bridges - maybe more... he casts an expert and erudite eye on these impressive constructions and, in the process, it's hard not to join him in slack-jawed appreciation of these wonders of the architectural world." On Dan Cruikshank: "I think he might be a god, and if not then he's definitely part wizard." (THE GUARDIAN on Adventures in Architecture) "the book allows you to savour at greater leisure his undoubted scholarship." (SUNDAY TELEGRAPH on Around the World in Eighty Treasures) "a book both solid and lively enough to transcend tie-in status. Cruickshank boasts breadth and depth" (INDEPENDENT on Around the World in Eighty Treasures) "... beneath the jocular surface lies an entirely serious expertise. The breadth of Cruickshank's knowledge and the very speed of his journey enables him to make striking connections between apparently unrelated cultures... illuminating... inspirational." (THE GUARDIAN on Around the World in Eighty Treasures) "loveable presenter" (RADIO TIMES on Adventures in Architecture) "enthusiasm backed up by impressive research." (SUNDAY TELEGRAPH (TRAVEL) on Around the World in Eighty Treasures)

Leading expert on architecture and historic buildings and BBC presenter, best known for Around The World In 80 Treasures and Adventures In Architecture. He has travelled extensively, and is an Honorary Fellow of RIBA with a BA in Art, Design and Architecture. He is currently filming a new BBC documentary celebrating 250 years of Kew Gardens.