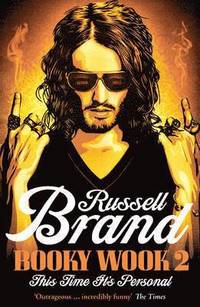 This Time it's Personal

av Russell Brand
(1 röst)
Häftad Engelska, 2011-08-01
149
Köp
Spara som favorit
Skickas inom 5-8 vardagar.
Fri frakt inom Sverige över 159 kr för privatpersoner.
In the sequel to Russell's best-selling biography 'My Booky Wook' we follow the now sober but still scandalous, sex-fuelled star on his electrifying rise to international fame. A roller coaster ride through tours, films, stand up and tabloids - this time, it's personal. Rarely has a sequel delivered on the promise of the original with such literary and comic gusto. In Booky Wook 2: This Time It's Personal, Russell Brand takes off where his international best-seller My Book Wook left off. Brand is sober and, after dedicating his life and compromising his sanity in the pursuit of fame, he has had his first taste of national notoriety. Does fame bring happiness and inner peace? Not exactly, but it does mean a lot of sex. It also ushers in an unforgettable and raucous ride through chat shows, tabloid scandals, and Hollywood, all the while detailing Brand's search for the contentment that fame can't quite grant. Booky Wook 2 is a "celebrity memoir" unlike any you've read before: more clever and inventive than ever, Russell Brand explores the consequences of massive stardom just as he demonstrates the power of language and wit to make sense of it all.
Visa hela texten

Reviews of Booky Wook 2: "Devotees will be devouring Russell's outrageous Booky Wook 2: This Time it's Personal. This man loves to offend and to challenge the reader by being incredibly funny." The Times "This book [...] reminds you of how funny and original he is; also how British; also what a loss to the old motherland." Sunday Times Culture "A witty and engaging raconteur, Brand makes no apologies and takes no prisoners throughout this lively account of his (sex) life and career." Hot Press

Russell Brand is a comedian, journalist, TV presenter and radio presenter, and actor. He has won numerous awards including Time Out's `Comedian of the Year', `Best Newcomer at the British Comedy Awards', `Best TV Performer' at the Broadcasting Press Guild Awards and `Most Stylish Man' at GQ's Men of the Year Awards. The first instalment of his autobiography, My Booky Wook, was a No.1 Sunday Times bestseller. It also won the Tesco `Biography of the Year' award at the Galaxy British Book Awards.