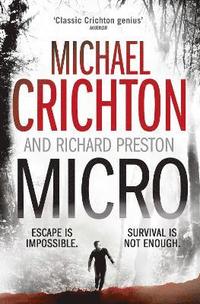 av Michael Crichton, Richard Preston
(1 röst)
Häftad Engelska, 2012-04-12
159
Köp
Spara som favorit
Skickas inom 5-8 vardagar.
Fri frakt inom Sverige för privatpersoner.
Finns även som
Visa alla 7 format & utgåvor
An instant classic in the vein of Jurassic Park, this boundary-pushing novel has all the hallmarks of Michael Crichton's greatest adventures with its combination of pulse-pounding thrills, cutting-edge technology, and extraordinary research Three men are found dead in a locked second-floor office in Honolulu. There is no sign of struggle, though their bodies are covered in ultra-fine, razor-sharp cuts. With no evidence, the police dismiss it as a bizarre suicide pact. But the murder weapon is still in the room, almost invisible to the human eye. In Cambridge, Massachusetts, seven graduate students at the forefront of their fields are recruited by a pioneering microbiology start-up company. Nanigen MicroTechnologies sends them to a mysterious laboratory in Hawaii, where they are promised access to tools that will open up a whole new scientific frontier. But this opportunity of a lifetime will teach them the true cost of existing at the cutting-edge... The group becomes prey to a technology of radical, unimaginable power and is thrust out into the teeming rainforest. Armed only with their knowledge of the natural world, the young scientists face a hostile wilderness that threatens danger at every turn. To survive, they must harness the awe-inspiring creative - and destructive - forces of nature itself.
Visa hela texten

Praise for Michael Crichton: 'One of the most ingenious, inventive thriller writers around ... Prey sees him doing what he does best - taking the very latest scientific advances and showing us their potentially terrifying underbelly. Another high-concept treat ... written in consummate page-turning style' Observer 'This is Crichton on top form, preying on our fears about new technology and convincing us that we aren't half as afraid as we should be' The Times on Prey 'Mixing cutting-edge science with thrills and spills, this is classic Crichton' Daily Mirror on Prey 'A satirical black-comedy thriller... Crichton writes likes Tom Wolfe on speed... completely brilliant... Crichton's treatise on how breakthroughs in genetic science have been hijacked by science is anything but dull... top form' Daily Mail on Next 'The pages whip by. Does exactly what you want the prose in a thriller to do' Telegraph on State of Fear

Michael Crichton's novels include Next, State of Fear, Prey, Timeline, Jurassic Park, and The Andromeda Strain. He is also known as a filmmaker and the creator of ER. He has sold over 200 million books, which have been translated into thirty-six languages; thirteen have been made into films. He remains the only writer to have had the number one book, movie, and TV show at the same time. He died in 2008.