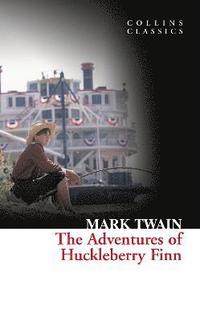 The Adventures Of Huckleberry Finn

av Mark Twain
(1 röst)
Häftad Engelska, 2010-04-01
55
Köp
Spara som favorit
Finns även som
Visa alla 8 format & utgåvor
HarperCollins is proud to present its new range of best-loved, essential classics. 'We said there warn't no home like a raft, after all. Other places do seem so cramped up and smothery, but a raft don't. You feel mighty free and easy and comfortable on a raft.' Huck Finn escapes from his alcoholic father by faking his own death and so begins his journey through the Deep South, seeking independence and freedom. On his travels, Huck meets an escaped slave, Jim, who is a wanted man, and together they journey down the Mississippi River. Raising the timeless and universal l issues of prejudice, bravery and hope, the Adventures of Huckleberry Finn was and still is considered the great American novel.
Visa hela texten

Samuel Langhorne Clemens (November 30, 1835 - April 21, 1910), better known by the pen name Mark Twain, was an American author and humorist. Twain is most noted for his novels the ADVENTURES OF HUCKLEBERRY FINN, which has since been called the Great American Novel, and the ADVENTURES OF TOM SAWYER. Twain enjoyed immense public popularity, and his keen wit and incisive satire earned him praise from both critics and peers. American author William Faulkner called Twain 'the father of American literature'.