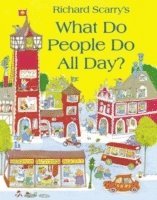 What Do People Do All Day?

av Richard Scarry
(2 röster)
Häftad Engelska, 2010-03-04
3-6 år
99
Köp
Spara som favorit
Richard Scarry's classic has been a favourite with children the world over for more than 50 years. Share in the magic of Scarry's Busytown with this beautiful paperback edition. This gorgeous paperback edition of the beloved Scarry classic is packed with things to spot on every page. What Do People Do All Day? is beautiful, fun and has been a favourite with children of all ages for more than 50 years. Everyone is busy in Busytown - from train drivers to doctors, from mothers to sailors, in police stations and on fire engines. Follow lots of busy people working through their busy days! Captain Salty and his crew are getting ready to go on a voyage; Doctor Lion is busy at the hospital; Sergeant Murphy is working hard to keep things safe and peaceful; and engineers are building new roads. Packed full of activity and funny details to discover, this celebration of Busytown and its inhabitants will keep curious minds occupied for hours on end! Perfect for ages 3 and up.
Visa hela texten

PRAISE FOR RICHARD SCARRY: 'A favourite of children for generations' - Junior magazine 'Enchanting and inspiring' - TES 'One of my favourite books for many years has been Cars and Trucks and Things That Go' - Paul Smith

Born in Boston in 1919, Richard Scarry's drawing talent led him to study at the Boston Museum School. He began his career as an illustrator and freelance artist, and in 1963 he published his first book, RICHARD SCARRY'S BEST WORD BOOK EVER, which became an international bestseller. Scarry has since sold over 300 million books worldwide and been translated into dozens of languages.