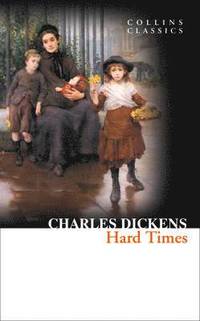 av Charles Dickens
Häftad Engelska, 2012-05-02
40
Köp
Spara som favorit
Finns även som
Visa alla 8 format & utgåvor
HarperCollins is proud to present its incredible range of best-loved, essential classics. 'It was a town of red brick, or of brick that would have been red if the smoke and ashes had allowed it; but as matters stood, it was a town of unnatural red and black like the painted face of a savage.' Set in fictitious Coketown, England during the Industrial Revolution of the 1850s, Dickens wished to expose the enormous gulf between the rich and poor through his writing. In Hard Times, the social and moral purpose of his work is at its most evident. Openly ironic and satirical in its tone, Dickens suggests a mechanization of society, where the wealthy are ruthless and uncharitable towards those less fortunate than themselves. Siblings Louisa and Tom Gradgrind are raised by their father, a harsh and pragmatic educator and his influence means that they go on to lead lives that are lacking in all areas. Louisa marries the arrogant and greedy Josiah Bounderby, ending in an unhappy pairing and the unfeeling and villainous Tom robs his own brother-in-law's bank. As their father watches their plight, he realises that his own principles may have led to their downfall.
Visa hela texten

Charles Dickens was born in 1812 and grew up in poverty. This experience influenced 'Oliver Twist', the second of his fourteen major novels, which first appeared in 1837. When he died in 1870, he was buried in Poets' Corner in Westminster Abbey as an indication of his huge popularity as a novelist, which endures to this day.