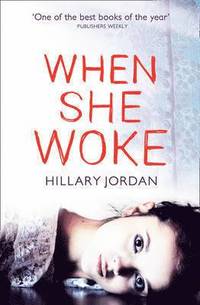 av Hillary Jordan
(1 röst)
Häftad Engelska, 2012-08-30
119
Köp
Spara som favorit
Skickas inom 7-10 vardagar.
Fri frakt inom Sverige över 159 kr för privatpersoner.
Kan levereras innan jul!
Finns även som
Visa alla 2 format & utgåvor
Hannah Payne is a RED. Her crime: MURDER. And her victim, says the state of Texas, was her unborn child. Lying on a table in a bare room, covered by only a paper gown, Hannah awakens to a nightmare. Cameras broadcast her every move to millions at home, for whom observing new Chromes - criminals whose skin has been genetically altered to match the class of their crime - is a sinister form of entertainment. Hannah refuses to reveal the identity of her father. But cast back into a world that has marked her for life, how far will she go to protect the man she loves? An enthralling and chilling novel from the author of MUDBOUND, for fans of THE HANDMAID'S TALE and THE SCARLET LETTER.
Visa hela texten

'Hillary Jordan channels Nathaniel Hawthorne by way of Margaret Atwood in this fast-paced, dystopian thriller. Unputdownable' Valerie Martin, author of The Confessions of Edward Day 'Not only one of the best books of the year, but it's everything the dystopian genre was made for . . . An instant classic for the 21st century' Publisher's Weekly 'Holds its own alongside the dark intentions of Margaret Atwood and Ray Bradbury' NEW YORK TIMES 'A stunning futuristic thriller ... the setup in the first part of the book is excellent, very Handmaid's Tale, the second half is a straight chase and escape tale. The whole thing is stunning.' The Bookseller PRAISE FOR HILLARY JORDAN: 'Hillary Jordan writes with the force of a Delta storm' Barbara Kingsolver 'Jordan's tautly structured debut . . . confronts disturbing truths about America's past with a directness and a freshness of approach that recalls Alice Walker's The Color Purple.' The Times 'The winner of Barbara Kingsolver's Bellwether Prize for a novel 'promoting social responsibility,' Hillary Jordan is happily a writer who puts her duty to entertain first' The Independent

Hillary Jordan spent fifteen years working as an advertising copywriter before starting to write fiction. Her first novel, MUDBOUND, was named one of the Top Ten Debut Novels of the Decade by Paste Magazine. It won the 2006 Bellwether Prize, founded by Barbara Kingsolver and awarded biennially to an unpublished debut novel that addresses issues of social justice. Hillary grew up in Dallas, Texas and Muskogee, Oklahoma. She lives in Brooklyn.