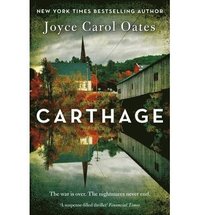 av Joyce Carol Oates
(2 röster)
Häftad Engelska, 2014-10-23
149
Köp
Spara som favorit
Skickas inom 5-8 vardagar.
Gratis frakt inom Sverige över 159 kr för privatpersoner.
Finns även som
Visa alla 4 format & utgåvor
A young girl's disappearance rocks a community and a family, in this stirring examination of grief, faith, justice and the atrocities of war, from literary legend Joyce Carol Oates. Cressida Mayfield has gone missing. The desperate search yields but one clue; she was last seen in the company of Corporal Brett Kincaid, Iraq veteran - and the ex-fiance of Cressida's sister. As the deeply traumatized Kincaid struggles to mount a defence, he finds his memories of that terrible night are tangled with those of the most appalling wartime savagery. Dark and riveting, the nerve-shredding Carthage unravels the devastating consequences of violence on two young lives, while probing the very limits of our capacity for forgiveness.
Visa hela texten

'[Joyce Carol Oates] is simply the most consistently inventive, brilliant, curious and creative writer going, as far as I'm concerned' Gillian Flynn, author of "Gone Girl" 'The ever-prolific Joyce Carol Oates is at the top of her game in this suspense-filled thriller ... about guilt, punishment and forgiveness' Financial Times 'A substantial book that deals with truths of the type that we often do not want to confront ... Oates is an ambitious writer of huge confidence ... The characters ... are brilliantly drawn ... but what keeps you going is the writing ... Oates writes about America's big themes. Her prose is elegant. She is the mistress of all she surveys' The Times '"Carthage" is not just the suspense thriller it had seemed at first sight ... what it attains is a profound and poignant vision of American guilt, and its potential for some kind of absolution' John Burnside, Guardian 'A gripping exploration of a community in crisis after a young girl disappears' Stella Magazine, Sunday Telegraph 'The prolific Joyce Carol Oates is back doing what she does best - exposing the darkness of the human heart' Good Housekeeping 'Joyce Carol Oates is ... a rare example of a prolific author who has managed to maintain her reputation as a serious literary novelist ... "Carthage" is an immensely proficient novel, with careful and elegant prose, and interesting experiments with form ... an intriguing and unpredictable read. Oates succeeds in portraying the complex damage done to the fabric of a society by war - no matter how far away it is' Frances Perraudin, Observer 'Her characters are created with a Dickensian sharpness of detail, and their relationships with one another are often involving; her language is rough-hewn and lovely; her plots are suspenseful and artfully made ... Her new novel is her most substantial in some time' Edmund Gordon, Sunday Times

Joyce Carol Oates is a recipient of the National Book Award and the PEN/Malamud Award for Excellence in Short Fiction. She has written some of the most enduring fiction of our time, including 'We Were the Mulvaneys', which was an Oprah Book Club Choice, and 'Blonde', which was nominated for the National Book Award. She is the Roger S. Berlind Distinguished Professor of Humanities at Princeton University.