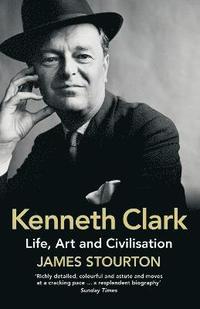 av James Stourton
Häftad Engelska, 2017-09-21
139
Köp
Spara som favorit
Finns även som
Visa alla 2 format & utgåvor
SHORTLISTED FOR THE BERGER PRIZE FOR BRITISH ART HISTORY 2017 SHORTLISTED FOR THE SLIGHTLY FOXED BEST FIRST BIOGRAPHY PRIZE 2017 A SUNDAY TIMESART BOOK OF THE YEAR A SPECTATORBOOK OF THE YEAR AN ECONOMISTBOOK OF THE YEAR A NEW YORK TIMESART BOOK OF THE YEAR From his time as Bernard Berenson's protege to being the Keeper of the Western Art at 27 and his appointment as the youngest-ever director of the National Gallery, Kenneth Clark displayed precocious genius. No voice has exercised so much power and influence over the arts in Britain as Clark's. A formidable aesthete, his coterie included John Betjeman, Winston Churchill, Margot Fonteyn, E.M. Forster, Vivien Leigh, the Queen Mother and Henry Moore. Hidden from view, however, was his wife Jane's alcoholism and his own philandering. In James Stourton's dazzling biography, Clark is shown as a man who conveyed the profound beauty and importance of art, architecture and civilisation for generations to come.
Visa hela texten

WINNER OF THE CATHOLIC HERALD BIOGRAPHY OF THE YEAR 'Richly detailed, colourful and astute and it moves at a cracking pace ... a resplendent biography' Sunday Times 'Superb ... Stourton, a former chairman of Southeby's, is the ideal choice for Clark's official biographer and has produced an accomplished book that is scholarly, entertaining, beautifully written and sympathetic, while far from uncritical' The Times 'Stourton has written a matchless biography. His evocation of his subtle, cool and brilliant subject gives an inspiring and even heroic sense of Clark...The book is a joyous read, with a dashing, stylish pace that disguises formidable but unpretentious erudition', Richard Davenport-Hines, The Oldie 'Stourton ... has done this brilliantly, not only exploring [Clark's] gifts as author, lecturer, film-maker and champion of British art but also as public figure ... this assiduous and accomplished biography will bring about a second Great Clark Boom' Spectator 'Astutely analyses Clark's emotional and intellectual contradictions' Observer 'Delightfully readable and authoritative' Economist 'Stourton writes with a blend of passion and coolness perfectly suited to his subject and produces a picture that should satisfy the most pernickety critic', James Naughtie, Mail on Sunday 'A lithe, elegant, astute celebration', Richard Davenport-Hines, New Statesman 'An elegant and perceptive portrayal of the ultimate arts grandee', Michael Prodger, New Statesman 'Outstanding ... Stourton's great achievement is to make a unity of Clark's career ... this exemplary biography combines Clark's strengths of clarity and concision with the quality he so painfully lacked, warmth' Country Life 'James Stourton leaves no stone unturned in Kenneth Clark, his magisterial and engrossing biography, which achieves a perfect balance between Clark's complex private world and his hugely successful career', Amanda Foreman

James Stourton graduated from Cambridge Art History Faculty in 1979 and joined Sotheby's Old Master paintings department. Over the next thirty years he organised many famous sales and became Chairman of Sotheby's UK in 2007. Alongside his Sotheby's career James developed an academic interest in Patronage and Collecting, publishing many articles for Apollo, Country Life, the Independent, the Spectator and The Times as well as lecturing to The Art Fund, Cambridge Art History Faculty and Sotheby's Institute. He has published five books including 'Great Collectors of Our Time: Art Collecting since 1945'; 'The British as Art Collectors' (with Charles Sebag-Montefiore) and 'Great Houses of London'. Today he sits on the Panel of the Heritage Memorial Fund and also the Acceptance in Lieu Panel.