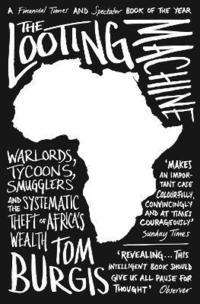 Warlords, Tycoons, Smugglers and the Systematic Theft of Africa's Wealth

av Tom Burgis
Häftad Engelska, 2016-04-07
130
Köp
Spara som favorit
Overseas Press Club Award Winner 2016 A shocking investigative journey into the way the resource trade wreaks havoc on Africa, 'The Looting Machine' explores the dark underbelly of the global economy. 'The Looting Machine' is a searing expose of the global web of traders, bankers, middlemen, despots and corporate raiders that is pillaging Africa's vast natural wealth. From the killing fields of Congo to the crude-slicked creeks of Nigeria, a great endowment of oil, diamonds, copper, iron, gold and coltan has become a curse that condemns millions to poverty, violence and oppression. That curse is no accident. This gripping investigative journey takes us into the shadows of the world economy, where secretive networks conspire with Africa's kleptocrats to bleed the continent dry. And like their victims, the beneficiaries of this grand looting have names.
Visa hela texten

'Revealing ... Explains lucidly how the oil and mineral bonanza subverts societies ... particularly acute in analysing how multinationals connive in this institutionalised theft ... This intelligent book should give us all pause for thought when we fill our cars with petrol' Sunday Times 'A powerful case, through anecdote and evidence, that the dirty trade in raw materials serves individuals' own enrichment' The Times '[Burgis] presents a lively portrait of the rapacious "looting machine" ... a rich collage of examples showing the links between corrupt companies and African elites' Economist 'A great scrapbook of exploitation. Burgis has the good sense not to present it in an alarmist way, but with an understatement that is far more powerful ... [it] is in part a means of self-exoneration, a way of making amends to those he ultimately could not help ... He has done a service to some of the world's poorest people' Financial Times 'Excellent. Burgis ensures that we don't stop wondering who does what in Africa and how we are all party to what Western "investors" are up to. The post-colonial corruption and rape of African resource to the benefit of western consumption is still alive and horribly well' Jon Snow 'Burgis has managed to uncover a system responsible for the wholesale looting of Africa's mineral resources for the benefit of oligarchic and state interests around the world. Burgis, a gifted young journalist, has tracked down all these characters across some of Africa's most dangerous hotspots and beyond. Vivid, eye-popping and even at times very funny' Misha Glenny, author of 'McMafia' 'Makes an important case colourfully, convincingly and at times courageously as he confronts some of those involved in the pillaging' Observer '[An] excellent, finely reported book ... The great value lies in its fresh detail, storytelling and the characters Burgis introduces. Crammed with colour and lively investigative reporting' Literary Review '[A] major contribution' TLS

Tom Burgis won a fellowship at the Financial Times in 2006, and has worked on the paper ever since. He has reported from London, Brussels, South America and Africa, writing on the privation and conflict that accompanies the resource trade. His work has appeared in the Telegraph, the Independent, the Observer, the New Statesman, the Big Issue and Open Democracy, and in 2010 he was shortlisted for 'Young Journalist of the Year' at the British Press Awards.