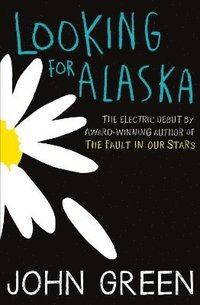 av John Green
(8 röster)
Häftad Engelska, 2013-02-28
124
Köp
Spara som favorit
Kan tyvärr inte levereras innan julafton.
Finns även som
Visa alla 8 format & utgåvor
The unmissable first novel from bestselling and award-winning author of THE FAULT IN OUR STARS and TURTLES ALL THE WAY DOWN. "In the dark beside me, she smelled of sweat and sunshine and vanilla and on that thin-mooned night I could see little more than her silhouette, but even in the dark, I could see her eyes - fierce emeralds. And beautiful." BEFORE. Miles Halter's whole life has been one big non-event until he starts at anything-but-boring Culver Creek Boarding School and meets Alaska Young. Gorgeous, clever, funny and utterly fascinating she pulls Miles into her world, launches him into a new life, and steals his heart. But when tragedy strikes, and Miles comes face-to-face with death he discovers the value of living and loving unconditionally. AFTER: Nothing will ever be the same. Poignant, funny, heartbreaking and compelling, this novel will stay with you forever.
Visa hela texten

"Miles's narration is alive with sweet, self-deprecating humor, and his obvious struggle to tell the story truthfully adds to his believability." School Library Journal "What sings and soars in this gorgeously told tale is Green's mastery of language and the sweet, rough edges of Pudge's voice. Girls will cry and boys will find love, lust, loss and longing in Alaska's vanilla-and-cigarettes scent." Kirkus "This is an amazing first novel by a writer who is young enough to vividly remember his powerful years of high school and he expertly turns remembrance into story." Children's Literature "The novel's chief appeal lies in Miles's well-articulated lust and his initial excitement about being on his own for the first time." Publishers Weekly

John Green is an award-winning, New York Times bestselling author of several YA novels including THE FAULT IN OUR STARS and TURTLES ALL THE WAY DOWN. He has received numerous accolades including the Printz Medal, a Printz Honor and the Edgar Award. John is also one half of the Vlogbrothers; co-creator, with his brother, Hank, of the popular video blog Brotherhood 2.0, which has been watched more than 30 million times by Nerdfighter fans all over the globe (youtube.com/vlogbrothers). Join John's 5.3 million followers on Twitter (@johngreen) or visit him online at johngreenbooks.com and probablysignedturtles.com. John lives with his wife and son in Indianapolis, Indiana.