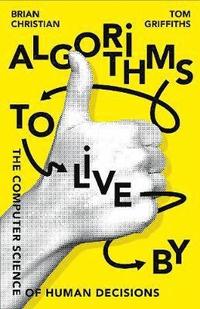 Algorithms to Live By

The Computer Science of Human Decisions

av Brian Christian, Tom Griffiths
(1 röst)
Häftad Engelska, 2017-04-06
149
Köp
Spara som favorit
Skickas inom 3-6 vardagar.
Fri frakt inom Sverige över 159 kr för privatpersoner.
Finns även som
Visa alla 4 format & utgåvor
A fascinating exploration of how computer algorithms can be applied to our everyday lives. In this dazzlingly interdisciplinary work, acclaimed author Brian Christian and cognitive scientist Tom Griffiths show us how the simple, precise algorithms used by computers can also untangle very human questions. Modern life is constrained by limited space and time, limits that give rise to a particular set of problems. What should we do, or leave undone, in a day or a lifetime? How much messiness should we accept? The authors explain how to have better hunches and when to leave things to chance, how to deal with overwhelming choices and how best to connect with others. From finding a spouse to finding a parking spot, from organizing one's inbox to understanding the workings of human memory, Algorithms To Live By is full of practical takeaways to help you solve common decision-making problems and illuminate the workings of the human mind.
Visa hela texten

'I've been waiting for a book to come along that merges computational models with human psychology - and Christian and Griffiths have succeeded beyond all expectations. This is a wonderful book, written so that anyone can understand the computer science that runs our world - and more importantly, what it means to our lives' David Eagleman, author of 'Sum: Tales from the Afterlives' 'Compelling and entertaining, Algorithms to Live By is packed with practical advice about how to use time, space, and effort more efficiently. And it's a fascinating exploration of the workings of computer science and the human mind. Whether you want to optimize your to-do list, organize your closet, or understand human memory, this is a great read' 'Charles Duhigg, author of The Power of Habit' 'A truly beautiful exploration through math, computer science and philosophy of some of the most ordinary, yet most important dilemmas any of us is likely to face. Filled with humour and wisdom, this is a bible with a brain' Aarathi Prasad

Bloggat om Algorithms to Live By

Brian Christian is the bestselling author of The Most Human Human, which was named a Wall Street Journal bestseller and a New Yorker favorite book of 2011. His writing has appeared in Wired, The Atlantic, The Wall Street Journal , and The Paris Review, among others. Brian has been a featured guest on The Daily Show with Jon Stewart, The Charlie Rose Show, NPR's Radiolab, and the BBC, and has lectured at Google, Microsoft, SETI, the Santa Fe Institute, the Royal Institution of Great Britain, and the London School of Economics. Tom Griffiths is an Associate Professor of Psychology and Cognitive Science and Director of the Institute of Cognitive and Brain Sciences at the University of California, Berkeley. He has published over 150 scientific papers on a wide range of topics, including machine learning and cultural evolution in addition to cognitive psychology, and he has received numerous early career awards, including those from the National Science Foundation, the Sloan Foundation, and the American Psychological Association.