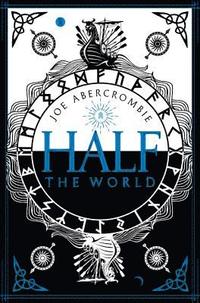 av Joe Abercrombie
(1 röst)
Häftad Engelska, 2015-06-18
119
Köp
Spara som favorit
Kan levereras innan julafton!
Finns även som
Visa alla 2 format & utgåvor
'Grabbed me and refused to let go' George R.R. Martin Thorn Bathu was born to fight. But when she kills a boy in the training square she finds herself named a murderer. Fate places her life in the hands of the deep-cunning Father Yarvi as he sets out to cross half the world in search of allies against the ruthless High King. Beside her is Brand, a young warrior who hates to kill. A failure in her eyes and his own, the voyage is his last chance at redemption. But warriors can be weapons, and weapons are made for one purpose. Will Thorn always be a tool in the hands of the powerful, or can she carve her own path? Is there a place outside of legend for a woman with a blade?
Visa hela texten

Joe Abercrombie was born in Lancaster on the last day of 1974, the son of an English teacher and a sociologist. He spent much of his youth in imaginary worlds, and left school with a good idea of how to make stuff up. He moved to the big city, learned to brew tea, and ended up as a TV editor, working on documentaries, events and concerts for bands from Iron Maiden to Coldplay. But in the darkness of the night he was still making stuff up, and his first book, The Blade Itself, was published in 2006. He now lives in Bath with his wife Lou and their three children Grace, Eve and Teddy and makes stuff up full-time.