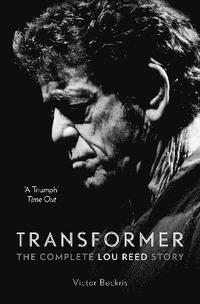 av Victor Bockris
Häftad Engelska, 2014-10-23
161
Köp
Spara som favorit
Kan levereras innan julafton!
Finns även som
Visa alla 1 format & utgåvor
'A triumph' - Time Out Transformer is the only complete and comprehensive telling of the Lou Reed story. Legendary songwriter and guitarist Lou Reed passed away on the 27th October 2013, but his musical influence is assured. Now discover the true story of the Velvet Underground pioneer in this update of Bockris's classic biography. Transformer: The Complete Lou Reed Story follows the great songwriter and singer through the series of transformations that define each period of his fifty year career. It opens with the teenage electroshock treatments that dominated his memories of childhood and never stops revealing layer after layer of this complex and often anguished artist and man. Transformer is based on Lou's collaborations with the hardest and most romantic artists of his times, from John Cale, Andy Warhol, and Nico, through David Bowie, Robert Wilson, Laurie Anderson and the ghost of Edgar Alan Poe. Rippling underneath everything he did are Lou's relationships with his various muses, from his college sweetheart to his three wives (and one drag queen). Leading Lou Reed biographer, Victor Bockris - who knew Lou throughout the Rachel Years, from Rock 'n' Roll Animal to the Bells - updates his original biography in the wake of Lou's death. Through new interviews and photos, he reveals the many transformations of this larger-than-life character, including his final shift from Rock Monster to the Prince Charming he had always wanted to be in the twenty years he spent with the love of his life, Laurie Anderson . Except with Lou, you could never really know what might happen next... Including previously unseen photographs and contributions from Lou's innermost circle and collaborators that include similarly esteemed artists such as Andy Warhol and David Bowie, Transformer is as captivating and vivid a read as befits an American master.
Visa hela texten

"Bockris's new work is instantly recognizable as the heavyweight psychological powerplay Lou Reed's legend deserves...Reed is effectively pinned like a butterfly" - Q Magazine "Transformer depicts the singer's life as a series of death-defying second acts" - New York Times Book Review "A very readable portrait...Blending informed biographical narrative with abundant quotes and a dishy, conversational style, Bockris captures the many moods - and mood swings - of a true rock and roll chameleon" - Entertainment Weekly "Transformer is an even more staggering brief than Wired (about John Belushi)" - Spin "Bockris provides insight into the private life that led Reed to create many of rock's memorable songs, including "Heroin" and "Walk on the Wild Side" - Publishers Weekly "One of the funniest and most memorable time-lined rock documents around" - Philadelphia City Paper

Victor Bockris has written a dozen books which form a mythology for the counterculture. His biographies of Andy Warhol, Keith Richards and Lou Reed made his name as the Poet Laureate of the New York Underground. His most recent books are: The Burroughs-Warhol Affair; and Burroughs Reloaded (photographs). The updated Transformer: The Lou Reed Story focuses on Reed's relationship and marriage to the leading performance artist of our times Laurie Anderson. It celebrates the deep influence these two artists had on each others work during the last 20 years of Lou Reed's life. Lou and Laurie both produced some of the greatest work they had ever done during this period