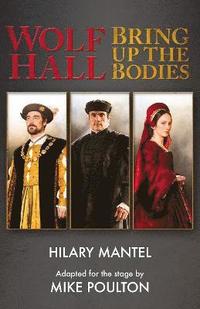 Wolf Hall &; Bring Up the Bodies

av Hilary Mantel, Mike Poulton
Häftad Engelska, 2014-05-22
179
Köp
Spara som favorit
Specialorder (osäker tillgång). Skickas inom 11-20 vardagar.
Fri frakt inom Sverige för privatpersoner.
A new, revised edition for the London transfer of Mike Poulton's expertly adapted two-part adaptation of Hilary Mantel's hugely acclaimed novels, featuring a substantial set of character notes by Hilary Mantel. Mike Poulton's 'expertly adapted' (Evening Standard) two-part ad adaptation of Hilary Mantel's acclaimed novels Wolf Hall and Bring Up the Bodies is a 'gripping piece of narrative theatre ... history made manifest' (Guardian). The plays were premiered to great acclaim by the Royal Shakespeare Company in Stratford-upon-Avon in 2013, before transferring to the Aldwych Theatre in London's West End in May 2014. Wolf Hall begins in England in 1527. Henry has been King for almost twenty years and is desperate for a male heir; but Cardinal Wolsey is unable to deliver the divorce he craves. Yet for a man with the right talents this crisis could be an opportunity. Thomas Cromwell is a commoner who has risen in Wolsey's household - and he will stop at nothing to secure the King's desires and advance his own ambitions. In Bring Up the Bodies, the volatile Anne Boleyn is now Queen, her career seemingly entwined with that of Cromwell. But when the King begins to fall in love with self-effacing Jane Seymour, the ever-pragmatic Cromwell must negotiate within an increasingly perilous Court to satisfy Henry, defend the nation and, above all, to secure his own rise in the world. Hilary Mantel's novels are the most formidable literary achievements of recent times, both recipients of the Man Booker Prize. This volume contains both plays and a substantial set of notes by Hilary Mantel on each of the principal characters, offering a unique insight into the adaptations and an invaluable resource to any theatre companies wishing to stage them.
Visa hela texten

'One hesitates to use the phrase "a marriage made in heaven" in the vicinity of Henry VIII but that would be a fair way of describing this brilliant union between the RSC and Hilary Mantel ... Such is the dramatic skill of the adaptation by Mike Poulton (with whom Mantel has worked closely) ... that, if the final instalment of the trilogy had been completed and turned into a play, I would gladly have stayed up all night' Paul Taylor, Independent 'A triumph ... gripping yet darkly funny ... a rollicking yarn that gives an eye-level idea of life at the Tudor court ... a bold, unforgettable lesson in history and politics' The Times 'Mike Poulton has done an outstanding job ... a gripping piece of narrative theatre ... characters have a three-dimensional richness ... This is history made manifest ... These plays are about class, passion, conscience, religious freedom and the danger of living in a society where power goes unchecked ... they show that novels can sometimes be made into very good plays.' Michael Billington, Guardian 'The mother of all costume dramas: a six-hour Tudor epic ... a groaning banquet of political shenanigans and deadly intrigue ... Poulton pulls off a remarkable act' Daily Mail 'Dark and gripping ... splendidly entertaining and at times deeply touching' Telegraph 'Event theatre of the highest brow ... nail-bitingly tense ... Historical drama of the highest calibre' Daily Express 'Poulton's adaptation ... triumphantly compresses almost 1,100 dense but deliciously written pages into nearly six hours of enthralling traffic on the stage.' Georgina Brown, Mail on Sunday

Hilary Mantel is the author of fifteen books, including A PLACE OF GREATER SAFETY, BEYOND BLACK, the memoir GIVING UP THE GHOST, and the short-story collection THE ASSASSINATION OF MARGARET THATCHER. Her two most recent novels, WOLF HALL and its sequel BRING UP THE BODIES, have both been awarded the Man Booker Prize.