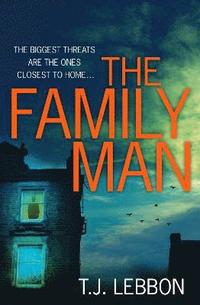 av T J Lebbon
Häftad Engelska, 2016-07-25
109
Köp
Spara som favorit
Skickas inom 5-8 vardagar.
Fri frakt inom Sverige över 159 kr för privatpersoner.
You take one risk. Now, those you love must pay ... Dom Turner is a dependable husband, a loving father. A man you can rely on. But it only takes one day to destroy a seemingly perfect life. Emma thought she could trust her husband, Dom. She thought he would always look after her and their daughter Daisy.... Then one reckless act ends in two innocent deaths - and Dom's family becomes the target of a terrifying enemy. There's nowhere to hide. They're on the run for their lives. And if Dom makes one more wrong move, he won't have a family left to protect.
Visa hela texten

Praise for T. J. Lebbon: `A pacy thriller ... had me on the edge of my seat' Sun `Leave(s) you exhilarated' Sunday Sport `A tension-fuelled thriller' CrimeFictionLover `Guaranteed to get your heart pounding' CrooksOnBooks

Tim J. Lebbon is a New York Times-bestselling writer with over thirty novels published to date, as well as dozens of novellas and hundreds of short stories. He has won four British Fantasy Awards, a Bram Stoker Award and a Scribe Award, and been shortlisted for the World Fantasy and Shirley Jackson awards. A movie of his story Pay the Ghost, starring Nicolas Cage, will be released soon, and several other projects are in development. He lives in the Monmouthshire countryside with his wife Tracey, children Ellie and Dan, and his dog Blu. He enjoys running and biking in the hills, and sometimes he imagines he's being chased.