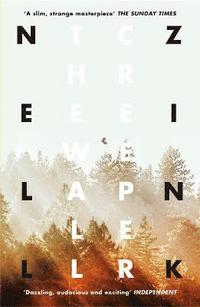 av Nell Zink
Häftad Engelska, 2016-03-10
119
Köp
Spara som favorit
Skickas inom 5-8 vardagar.
Fri frakt inom Sverige över 159 kr för privatpersoner.
'Heady and rambunctious ... Wake up, this book says: in its plot lines, in its humour, in its philosophical underpinnings and political agenda. I'll pay it the highest compliment it knows - this book is a wild thing.' New York Times Book Review Interlaken, Berne, 21st century. Several things happen after the car hits the rock. Tiff ceases to be pregnant. Stephen captures, like, the most wonderful bird - fleet, stealthy, and beautiful - a real "lifer". And the wallcreeper, the wallcreeper says "twee". The Wallcreeper is nothing more than a portrait of marriage, complete with all its requisite highs and lows: drugs, dubstep, small chores, anal sex, eco-terrorism, birding, breeding and feeding.
Visa hela texten

'A talent that is as rare and strange as a kestrel on Oxford Street . . . A slim, strange masterpiece, and one of those alluring, elliptical, exceptional novels that I will want to keep rereading for the rest of my life' The Sunday Times 'The Wallcreeper is the best book of 2014 ... Every page is an angular masterpiece' Dazed 'A dazzling debut ... Zink's novels are two of the most audacious and exciting I've read in a long time' Independent 'The Wallcreeper marks Zink as an extraordinary talent' Daily Telegraph 'Prodigiously intelligent and odd ... Zink's work is not tender, elegant, disciplined or classically proportioned, but it is clever, fierce, striking and original. So much so that it makes tender, elegant and so on look quite dull' Guardian 'An instrument of delight, an offering of kinship. Like its namesake, The Wallcreeper is fleet, stealthy and beautiful. It's a lifer indeed' New York Times 'The most exciting debut novel I've read recently ... a Zink's mordantly hilarious story of sex, drugs, and birdwatching' Guardian 'Zink is hilarious and cracklingly smart, and she takes the kind of risks that a novelist is supposed to take.' Jonathan Franzen 'Heady and rambunctious ... Wake up, this book says: in its plot lines, in its humour, in its philosophical underpinnings and political agenda. I'll pay it the highest compliment it knows - this book is a wild thing' New York Times Book Review 'Strange, hilarious, and utterly captivating' Harpers Bazaar 'Straying asymmetrically through its story of a partnership falling apart, in an uncontrollable environment, with a feeling that there's a heavy dose of autobiography in it ... Franzen might be right on this writer: Zink has written two books both worth talking about in the best salons in town, which will unsettle them in turn' Independent on Sunday 'The Wallcreeper's strange, nebulous weightiness, both personal and political, make her first novel a work of bizarre brilliance' New Statesman

Nell Zink has worked in the construction, pharmaceutical, and software industries, and is now a translator living in Germany. As a writer, Zink founded an indie rock fanzine in the '90s, and published short pieces in a variety of outlets. She is the author of the novels The Wallcreeper and Mislaid.