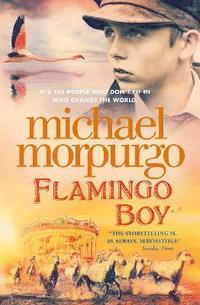 av Michael Morpurgo
Häftad Engelska, 2018-10-04
9-12 år
89
Köp
Spara som favorit
Skickas inom 5-8 vardagar.
Gratis frakt inom Sverige över 159 kr för privatpersoner.
Finns även som
Visa alla 3 format & utgåvor
A stunning new classic from master storyteller Michael Morpurgo for readers of 9+, in the vein of PRIVATE PEACEFUL and THE BUTTERFLY LION This is a landmark new novel from the nation's favourite storyteller, set in the unique landscape of the Camargue in the South of France during WW2. There, a young autistic boy lives on his parents' farm among the salt flats, and the flamingos that live there. There are lots of things he doesn't understand: but he does know how to heal animals. He loves routine, and music too: and every week he goes to market with his mother, to ride his special horse on the town carousel. But then the Germans come, with their guns, and take the town. A soldier shoots a flamingo from the sky, and it falls to earth terribly injured. And even worse is to come: the carousel is damaged, the horses broken. For this vulnerable boy, everything is falling apart. Only there's a kind sergeant among the Germans - a man with a young boy of his own at home, a man who trained as a carpenter. Between them, perhaps boy and man can mend what has been broken - and maybe even the whole town...
Visa hela texten

"Please invite this wonderful story in, you won't regret it. History is rarely more movingly alive." Morris Gleitzman Praise for Michael Morpurgo: "Michael Morpurgo writes brilliantly about war and animals, conveying the big emotions without preaching." Guardian "Champagne quality over a wide range of subjects." Daily Telegraph "There are few children's writers as compelling as Michael Morpurgo." Daily Express "Morpurgo, as always, is subtle and skilful, and incorporates social and moral issues into his writing without being self-righteous or detracting from the quality of the narrative" Elizabeth Reilly, British Council "The former children's laureate has the happy knack of speaking to both child and adult readers." Guardian

Michael Morpurgo OBE is one of Britain's best-loved writers for children, and has sold more than 35 million books around the world. He has written more than 150 novels and won many prizes, including the Smarties Prize, the Whitbread Award and the Blue Peter Book Award, while several of his books have been adapted for stage and screen, including the global theatrical phenomenon War Horse. Michael was Children's Laureate from 2003 to 2005, and founded the charity Farms for City Children with his wife, Clare. He was knighted in 2018 for services to literature and charity.