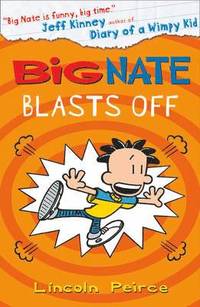 av Lincoln Peirce
Häftad Engelska, 2016-02-17
149
Bevaka
Spara som favorit
Tillfälligt slut – klicka "Bevaka" för att få ett mejl så fort boken går att köpa igen.
Finns även som
Visa alla 3 format & utgåvor
The 8th title in the New York Times bestselling Big Nate series! With a new crush, and the annual Mud Bowl coming up, can Nate make a good impression without slipping up?With more detentions than he can count, Nate is in DEEP in Big Nate Blasts Off!When Nate submits a mocking cartoon of Randy Betancourt - winner of PS 38's `most likely to mop the floor with someone else's face' award - to the school paper, tensions between the two are on the rise. After Randy jumps Nate the boys are caught in a fight by the Principle and forced to undergo joint peer counselling sessions run by Nate's arch-enemy: teachers' pet Gina!And as if that wasn't enough to deal with the Mud Bowl - an annual ultimate Frisbee game against P.S. 38's biggest rivals: Jefferson Middle School - is coming up. Will Nate be the star of the team, or a total bomb?And can he keep his crush on new-girl Ruby a secret, or will someone spill the beans?
Visa hela texten

"Lincoln Peirce is one of my cartooning heroes, and BIG NATE ranks as a comics classic. Year in and year out, Big Nate is among the best comics on the funny page." Jeff Kinney

Lincoln Peirce began creating comics in the 6th grade (just like Big Nate!). He went on to teach art at a New York City High School. Lincoln created the cartoon-strip character Big Nate in 1991, naming the character after a nickname he gave his older brother as a kid. He lives in Portland, Maine in the US and as well as creating Big Nate comic strips and books, he hosts a local radio show.