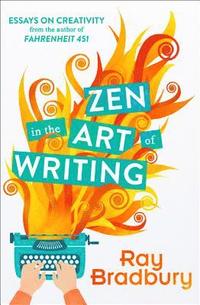 Zen in the Art of Writing

av Ray Bradbury
Häftad Engelska, 2015-05-21
121
Köp
Spara som favorit
Finns även som
Visa alla 1 format & utgåvor
In this exuberant book, the incomparable Ray Bradbury shares the wisdom, experience, and excitement of a lifetime of writing. The first thing a writer should be is - excited Author of the iconic FAHRENHEIT 451, THE ILLUSTRATED MAN and THE MARTIAN CHRONICLES, Ray Bradbury is one of the greatest writers of the twentieth century. Part memoir, part masterclass, ZEN IN THE ART OF WRITING offers a vivid and exuberant insight into the craft of writing. Bradbury reveals how writers can each find their own unique path to developing their voice and style. ZEN IN THE ART OF WRITING offers a celebration of the act of writing that will delight, impassion, and inspire.
Visa hela texten

'No other writer uses language with greater originality and zest. he seems to be a American Dylan Thomas - with discipline' Sunday Telegraph 'Let us now praise Ray Bradbury, the uncrowned poet laureate of science fiction.' The Times 'It is impossible not to admire the vigour of his prose, similes and metaphors constantly cascading from his imagination' Spectator 'Bradbury is an authentic original' Time Magazine

One of the greatest science fiction and fantasy writers of all time, Ray Bradbury was born in Waukegan, Illinois, in 1920. He moved with his family to Los Angeles in 1934. Since his first story appeared in Weird Tales when he was twenty years old, he published some 500 short stories, novels, plays, scripts and poems. Among his many famous works are Fahrenheit 451, The Illustrated Man and The Martian Chronicles. Ray Bradbury died in 2012 at the age of 91.