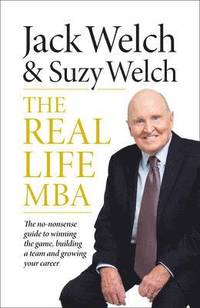 The No-Nonsense Guide to Winning the Game, Building a Team and Growing Your Career

av Jack Welch, Suzy Welch
Inbunden Engelska, 2015-04-14
389
Köp
Spara som favorit
Specialorder (osäker tillgång). Skickas inom 11-20 vardagar.
Fri frakt inom Sverige för privatpersoner.
Finns även som
Visa alla 3 format & utgåvor
Business authors Jack and Suzy Welch return, nearly a decade after publishing their international bestseller, Winning, to tackle the most pressing business challenges in the modern world. From creating winning strategies to leading and managing others The Real Life MBA acts as an essential guide for every person in business today - and tomorrow.You can talk about theories, concepts, and ideologies all you want, but when it gets right down to it, winning in business is all about mastering the gritty, inescapable, make-or-break, real-life dilemmas that define the new economy, the old economy, and everything in between. My boss is unbearable. I'm stuck in career purgatory. My team lacks enthusiasm. Our IT department is incompetent. Our strategy is outdated. We don't understand our Chinese partners. We're just not growing.This is the real stuff of work today.In the decade since their international best-seller Winning was published, Jack and Suzy Welch have dug deeper into the world of business than ever before , travelling the world consulting to businesses of every size and in every industry, working closely with entrepreneurs from Mumbai to Silicon Valley, starting their own company, and owning and managing more than 40 companies through private equity. Coupled with Jack's 20 years of iconic leadership at GE and Suzy's tenure as editor of the Harvard Business Review, their new database of knowledge infuses the pages of The Real Life MBA with fresh, relevant stories and equally powerful solutions.
Visa hela texten

Jack Welch began his career with the General Electric Company in 1960, and in 1981 became the company's 8th Chairman and CEO. During his tenure, GE's market capitalization increased by $400 billion, making it the world's most valuable corporationy. Retiring from GE in 2001, he went on to publish his autobiography Jack: Straight from the Gut, an international bestseller and the worldwide bestseller, Winning.Suzy Welch is the former editor of the Harvard Business Review and an experienced management consultant. She is best known as a writer and editor of numerous books and articles about leadership, change and HR management.