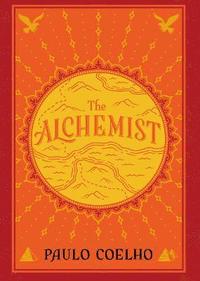 av Paulo Coelho
(1 röst)
Inbunden Engelska, 2015-07-02
129
Köp
Spara som favorit
Skickas inom 5-8 vardagar.
Fri frakt inom Sverige över 159 kr för privatpersoner.
Beställ boken senast måndag 14 december kl. 12:45 för leverans innan julafton
Finns även som
Visa alla 4 format & utgåvor
A global phenomenon, The Alchemist has been read and loved by over 62 million readers, topping bestseller lists in 74 countries worldwide. Now this magical fable is beautifully repackaged in an edition that lovers of Paulo Coelho will want to treasure forever. Every few decades a book is published that changes the lives of its readers forever. This is such a book - a beautiful parable about learning to listen to your heart, read the omens strewn along life's path and, above all, follow your dreams. Santiago, a young shepherd living in the hills of Andalucia, feels that there is more to life than his humble home and his flock. One day he finds the courage to follow his dreams into distant lands, each step galvanised by the knowledge that he is following the right path: his own. The people he meets along the way, the things he sees and the wisdom he learns are life-changing. With Paulo Coelho's visionary blend of spirituality, magical realism and folklore, The Alchemist is a story with the power to inspire nations and change people's lives.
Visa hela texten

'His books have had a life-enhancing impact on millions of people.' THE TIMES 'One of the few to deserve the term Publishing Phenomenon.' INDEPENDENT ON SUNDAY 'Coelho's writing is beautifully poetic but his message is what counts... he gives me hope and puts a smile on my face.' DAILY EXPRESS 'I love The Alchemist.' OPRAH WINFREY 'The Alchemist is a beautiful book about magic, dreams and the treasures we seek elsewhere and then find on our doorstep.' MADONNA "I feel like the luckiest man on the planet. It's a dream come true for me," to be able to direct and star and bring Coelho's book to the screen." LAURENCE FISHBURNE on the upcoming film adaptation of The Alchemist "One of my favourite books is The Alchemist by Paulo Coelho, and I just believe that...I can create whatever I want to create. If I can put my head on it right, study it, learn the patterns...I feel very strongly that we are who we choose to be." WILL SMITH "When I'm on the set with young actors and sometimes you meet people in life who you feel they are a little confused and they want to be re-centered, there are two books that I always recommend. One of them is Siddhartha, and the other is The Alchemist. RUSSELL CROWE

Paulo Coelho is the author of The Alchemist, he was born in 1947 in the city of Rio de Janeiro, Brazil. Being the author of 30 books that have sold over 320 million copies in 170 countries, he has become one of the most widely read authors in the world today. Paulo Coelho has been a United Nations Messenger of Peace since 2007 and this has allowed him to continue to promote intercultural dialogue and to focus on the needs of children. He is a member of the Brazilian Academy of Letters and the recipient of over 115 awards and honours, including the Hans Christian Andersen Award, the Grinzane Cavour Book Award and the Chevalier de l'Ordre National de la Legion d'Honneur, to name a few. Other titles include: The Pilgrimage, Brida, The Valkyries, The Fifth Mountain, Manual of the Warrior of Light, Veronika Decides to Die, The Devil and Miss Prym, Eleven Minutes, The Zahir, Like the Flowing River, The Witch of Portobello, The Winner Stands Alone, Aleph.