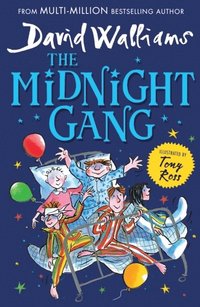 av David Walliams
Häftad Engelska, 2018-02-08
89
Köp
Spara som favorit
Kan levereras innan julafton!
Finns även som
Visa alla 5 format & utgåvor
Welcome to the Midnight Gang! Midnight is the time when all children are fast asleep, except of course for... the Midnight Gang. That is when their adventures are just beginning... When Tom gets hit on the head by a cricket ball, he finds himself at Lord Funt Hospital, and is greeted by a terrifying-looking porter. Things go from bad to worse when he meets the wicked matron in charge of the children's ward... But Tom is about to embark on the most thrilling journey of a lifetime! The Midnight Gang tells an extraordinarily heartwarming and, of course, funny story of five children on a hospital ward - and on a quest for adventure! It is a story of friendship and magic - and of making dreams come true. Readers are set to be utterly spellbound by this heartfelt story that will bring magic to everyone.
Visa hela texten

David Walliams has revolutionised reading for children and has become one of the most influential children's writers today. Since the publication of his ground-breaking first novel, The Boy in the Dress (2008), Walliams has seen unprecedented growth with global sales exceeding 45 million copies, and his books translated into 55 languages. Collectively across his titles, David has celebrated 70 weeks (non-consecutive) at number one in the overall book charts and more than 200 weeks (non-consecutive) at number one in the Children's charts - an achievement no other children's writer has reached. Born in London, Tony Ross went to art school in Liverpool. His cartoons have appeared in famous publications the world over. His first book, Hugo and the Wicked Winter, was published in 1972. Tony has since written over 100 books and illustrated over 2000!