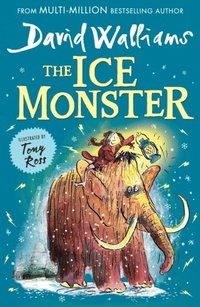 av David Walliams
Häftad Engelska, 2020-01-09
99
Köp
Spara som favorit
Finns även som
Visa alla 4 format & utgåvor
From No. 1 bestselling children's author David Walliams comes his biggest and most epic adventure! Illustrated by the artistic genius Tony Ross. This is the story of a ten-year-old orphan and a 10,000-year-old mammoth... Read all about it! Read all about it! ICE MONSTER FOUND IN ARCTIC! When Elsie, an orphan on the streets of Victorian London, hears about the mysterious Ice Monster - a woolly mammoth found at the North Pole - she's determined to discover more... A chance encounter brings Elsie face to face with the creature, and sparks the adventure of a lifetime - from London to the heart of the Arctic! Heroes come in all different shapes and sizes in David Walliams' biggest and most epic adventure yet!
Visa hela texten

PRAISE FOR DAVID WALLIAMS: "I absolutely love David Walliams's books. In a few more years they will become classics." - Sue Townsend, author of Adrian Mole "Dahl finally has a worthy successor" - Telegraph "Another triumph for David Walliams. His books are a breath of wonderful fresh air" - The Sun

David Walliams has revolutionised reading for children and has become one of the most influential children's writers today. Since the publication of his ground-breaking first novel, The Boy in the Dress (2008), Walliams has seen unprecedented growth with global sales exceeding 45 million copies, and his books translated into 55 languages. Collectively across his titles, David has celebrated 70 weeks (non-consecutive) at number one in the overall book charts and more than 200 weeks (non-consecutive) at number one in the Children's charts - an achievement no other children's writer has reached. Born in London, Tony Ross went to art school in Liverpool. His cartoons have appeared in famous publications the world over. His first book, Hugo and the Wicked Winter, was published in 1972. Tony has since written over 100 books and illustrated over 2000!