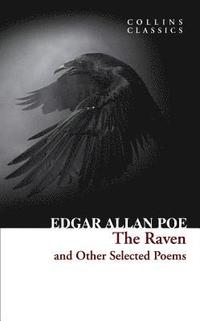 The Raven and Other Selected Poems

av Edgar Allan Poe
(1 röst)
Häftad Engelska, 2016-09-22
41
Köp
Spara som favorit
HarperCollins is proud to present its incredible range of best-loved, essential classics. ' "...Take thy beak from out my heart, and take thy form from off my door!" Quoth the Raven, "Nevermore." ' This selection of Edgar Allan Poe's poetical works includes some of his best-known pieces, including the triumphant, gleeful 'The Bells', the tragic ode 'Annabel Lee' and his famous gothic tour de force, 'The Raven'. Some present powerful, nightmarish images of the macabre and bizarre, while others have at their heart a profound sense of love, beauty and loss. All are linguistic masterpieces that demonstrate Poe's gift for marrying rhythm, form and meaning. An American writer of primarily prose and literary criticism, Edgar Allen Poe never ceased writing poetry throughout his turbulent life, and is today regarded as a central figure of American literary romanticism. He died in 1849.
Visa hela texten

'[Poe] was an adventurer into the vaults and cellars and horrible underground passages of the human soul.' D. H. Lawrence

Edgar Allan Poe was an American author, poet, editor and literary critic. A writer of fantastical, bizarre and sometimes disturbing short stories, he is best known for his tales of mystery and the macabre. He lived and worked in the first half of the nineteenth century and died a mysterious death, many believe caused by an overdose of drugs, at the age of 40 in 1849.