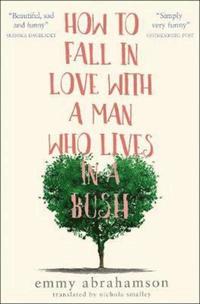 av Emmy Abrahamson
Häftad Engelska, 2018-01-25
99
Köp
Spara som favorit
Finns i lager! Skickas inom 1-2 vardagar.
Fri frakt inom Sverige över 159 kr för privatpersoner.
Finns även som
Visa alla 5 format & utgåvor
A fresh, hilarious and compulsively readable love story with the most wonderful kernel of truth to it. An uplifting and clever read for fans of Graeme Simsion and Marian Keyes. Julia is looking for Mr Right, but Ben is more Mr Right-Now-He-Could-Do-With-a-Bath.. You may think you know what kind of novel this is, but you'd be wrong. Yes, Julia is a single-girl cliche, living alone with her cat in Vienna and working in a language school. And yes, a series of disastrous dates has left her despairing of ever finding The One - until Ben sits next to her on a bench. He's tall, dark, handsome... ...and also incredibly hairy, barefoot, a bit ripe-smelling and of no fixed abode. You guessed it - they fall in love, as couples in novels do. But can Julia overlook the differences between them, abandon logic and choose with her heart? Funny, filthy (literally) and fizzing with life - and based on a true story! - this is the perfect antidote to all those books promising you that Prince Charming lives in a castle.
Visa hela texten

Emmy Abrahamson was born in 1976. She has written four YA books and was nominated for the August Prize in 2012 for THE ONLY WAY IS UP (Only vag is upp). When she met her husband he was actually living in a bush. He was barefoot and dirty, but he was also the funniest, happiest and most charming person she'd ever met. HOW TO FALL IN LOVE WITH A MAN WHO LIVES IN A BUSH is a fictionalised version of their story, and Emmy's first novel for adults.