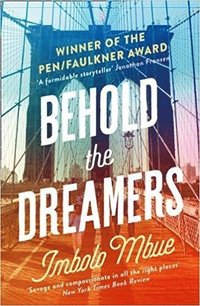 av Imbolo Mbue
(2 röster)
Häftad Engelska, 2017-08-10
119
Köp
Spara som favorit
Kan levereras innan julafton!
Finns även som
Visa alla 1 format & utgåvor
WINNER OF THE 2017 PEN/FAULKNER AWARD A NEW YORK TIMES BOOK OF THE YEAR AN OBSERVER BOOK OF THE YEAR AN OPRAH BOOK CLUB PICK 'A formidable storyteller' Jonathan Franzen 'Savage and compassionate in all the right places' New York Times Book Review 'Eerily timely ... bittersweet and buoyant' Jessie Burton New York, 2007. After two long years apart, Jende Jonga has brought his wife Neni from Cameroon to join him in the land of opportunity. Drawn by the promise of America they are seeking the chance of a better life for them and their son. When Jende lands a dream job as chauffeur to a Lehman Brothers executive, Neni finds herself taken into the confidence of his glamorous wife Cindy. The Edwards are powerful and privileged: dazzling examples of what America can offer to those who are prepared to strive for it. But when the financial world is rocked by the collapse of Lehman Brothers, all four lives are dramatically upended. As faultlines appear in both marriages and secrets bubble to the surface they must all decide how far they will go in pursuit of their dreams. And what will they sacrifice along the way? 'A marvellous debut... as deeply insightful as it is delightfully entertaining' Taiye Selasi
Visa hela texten

'There are no heroes in this marvellous debut, only nuanced human beings. A classic tale with a surprise ending, as deeply insightful as it is delightfully entertaining' Taiye Selasi 'As a dissection of the American Dream, Imbolo Mbue's first novel is savage and compassionate in all the right places' New York Times 'There's an innovative focus to this warm-hearted and timely debut. Cleverly created by fielding more than once class of New York dreamer' The Sunday Times 'Mbue crafts a satire of unusual subtlety.' Observer The cultural and racial observations are fresh, interesting and never laboured' Irish Times 'There are a lot of spinning plates and Mbue balances them skilfully, keeping everything in motion. Even more impressive is the vitality that gleams through the film of gloom as the story becomes less about the Jonga family from day to day than about their efforts to make peace with their fate, whatever and wherever that might be' Scotland on Sunday 'A debut novel that illuminates the immigrant experience in America with the tender-hearted wisdom so lacking in our political discourse . . . Mbue is a bright and captivating storyteller' Washington Post 'Mbue writes with great confidence and warmth . . . A capacious, big-hearted novel' New York Times Book Review

Imbolo Mbue is a native of Limbe, Cameroon. She holds a BS from Rutgers University and an MA from Columbia University. A resident of the United States for more than a decade, she lives in New York City. This is her first novel.