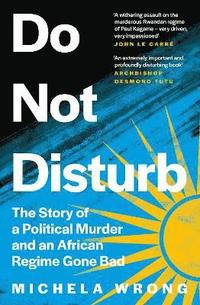 av Michela Wrong
Inbunden Engelska, 2021-04-01
249
Köp
Spara som favorit
Skickas inom 5-8 vardagar.
Gratis frakt inom Sverige över 159 kr för privatpersoner.
'A withering assault on the murderous regime of Kagame, and a melancholy love song to the last dreams of the African Great Lakes' John Le Carre A new book from the award winning author of In the Footsteps of Mr Kurtz, Do Not Disturb explores the controversial career of Paul Kagame and the legacy of the Rwandan genocide Do Not Disturb is a dramatic recasting of the modern history of Africa's Great Lakes region, an area blighted by the greatest genocide of the twentieth century. This bold retelling, vividly sourced by direct testimony from key participants, tears up the traditional script. In the old version, an idealistic group of young rebels overthrows a genocidal regime in Kigali, ushering in an era of peace and stability that makes Rwanda the donor darling of the West, winning comparisons with Switzerland and Singapore. The new version examines afresh questions which dog the recent past: Why do so many ex-rebels scoff at official explanations of who fired the missile that killed the presidents of Rwanda and Burundi? Why didn't the mass killings end when the rebels took control? Why did those same rebels, victory secured, turn so ruthlessly on one another? Michela Wrong uses the story of Patrick Karegeya, once Rwanda's head of external intelligence and a quicksilver operator of supple charm, to paint the portrait of a modern African dictatorship created in the chilling likeness of Paul Kagame, the president who sanctioned his former friend's murder.
Visa hela texten

Praise for Do Not Disturb: 'A withering assault on the murderous regime of Kagame, and a melancholy love song to the last dreams of the African Great Lakes ... very driven, very impassioned' John Le Carre 'Superb ... an epic tale of blood, bitterness and betrayal ... a gripping tale' The Times 'She has chosen to ignore that "Do Not Disturb" sign and, in an overdue book that takes the injunction as its title, she rips off the [Rwandan] regime's veil of respectability to expose the horrors beneath... [a] powerful, compelling and meticulously researched book' New Statesman 'Engrossing and revelatory ... apart murder mystery and part sweeping history of an extended family tragedy spread over two countries, three wars, four decades and a genocide' Observer '[A] brave and tremendous book ... [Michela Wrong] has produced a classic, her own journalistic complicity in the hollowness at the heart of power to rival Rian Malan's My Traitor's Heart and Gitta Sereny's Albert Speer: His Battle with Truth' Spectator 'In this extremely important and profoundly disturbing book, Michela Wrong sets out all the miss-steps that were ignored, all the flagrant human rights abuses that were overlooked and all the criminality for which excuses were found, until the new horrors that have been visited upon that country were perpetrated.' Archbishop Desmond Tutu, winner of the Nobel Peace Prize 'A damning j'accuse on many fronts. An extraordinarily brave piece of reporting' Financial Times 'Extraordinary and utterly gripping, an excoriating work of immense courage and commitment, one that will surely make waves' Philippe Sands, author of The Ratline: Love, Lies and Justice on the Trail of a Nazi Fugitive 'One of the most far-reaching historical revisions of Kagame and his regime. Meticulously researched, with substantial new material and interviews' Guardian

Michela Wrong is a distinguished international journalist, and has worked as a foreign correspondent covering events across the African continent for Reuters, the BBC and the Financial Times. She writes regularly for the New Statesman. Based on her experiences in Africa, In the Footsteps of Mr Kurtz, her first book, won the PEN James Sterne Prize for non-fiction.