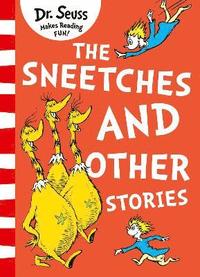 The Sneetches and Other Stories

av Dr Seuss
Häftad Engelska, 2017-09-07
88
Köp
Spara som favorit
Skickas inom 5-8 vardagar.
Gratis frakt inom Sverige över 159 kr för privatpersoner.
Finns även som
Visa alla 2 format & utgåvor
Some of the Sneetches have bellies with stars, but the plain-bellied ones have none upon thars! But an unexpected visitor soon leads them to discover they're not that different after all, in the first tale in this classic collection of stories. The Star-Bellied Sneetches have bellies with Stars, but the Plain-Bellied Sneetches don't, and the two just can't seem to get along. Rivalries rocket when Sylvester McMonkey McBean steps in to prey on their prejudices, but in the end we realise that prejudice is nothing more than a ridiculous waste of time. The first in a series of splendiferous Seussian stories. As part of a major rebrand programme, HarperCollins is relaunching Dr. Seuss's bestselling books, including such perennial favourites as The Cat in the Hat, Green Eggs and Ham and Fox in Socks. In response to consumer demand, the bright new cover designs incorporate much needed guidance on reading levels, with the standard paperbacks divided into three reading strands - Blue Back Books for parents to share with young children, Green Back Books for budding readers to tackle on their own, and Yellow Back Books for older, more fluent readers to enjoy. The Sneetches and Other Stories belongs to the Yellow Back Books range
Visa hela texten

Praise for Dr. Seuss: "[Dr. Seuss] has...instilled a lifelong love of books, learning and reading [in children]" The Telegraph "Dr. Seuss ignites a child's imagination with his mischievous characters and zany verses" The Express "The magic of Dr. Seuss, with his hilarious rhymes, belongs on the family bookshelf" Sunday Times Magazine "The author... has filled many a childhood with unforgettable characters, stunning illustrations, and of course, glorious rhyme" The Guardian

Theodor Seuss Geisel - better known to his millions of fans as Dr. Seuss - was born the son of a park superintendent in Springfield, Massachusetts, in 1904. After studying at Dartmouth College, New Hampshire, and later at Oxford University in England, he became a magazine humorist and cartoonist, and an advertising man. He soon turned his many talents to writing children's books, which included the creation of the one and only 'The Cat in the Hat', published in 1957, which went on to become the first of a successful range of early learning books known as Beginner Books.