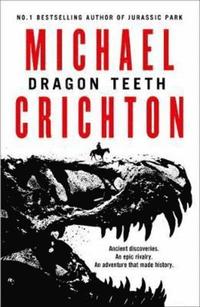 A gripping and entertaining read' Sunday Times `Filled with colorful Wild West characters' Washington Post `A fun, suspenseful, entertaining, well-told tale' USA Today Praise for Michael Crichton: `One of the most ingenious, inventive thriller writers around... Another high-concept treat... written in consummate page-turning style' Observer `This is Crichton on top form, preying on our fears about new technology and convincing us that we aren't half as afraid as we should be' The Times `Mixing cutting-edge science with thrills and spills, this is classic Crichton' Daily Mirror `Crichton masterfully maintains the suspense throughout the fast-paced story ... Prey will invade your nightmares for a long time to come' Time Out `A satirical black-comedy thriller... Crichton writes likes Tom Wolfe on speed... completely brilliant...' Daily Mail `Crichton pulls off a slick thriller at a cracking pace' Daily Telegraph `Exciting ... a master storyteller' Sunday Telegraph `Terrific fun. The pages whip by' Independent `A gripping, impeccably researched thriller' Evening Standard

Michael Crichton (1942-2008) was the author of the groundbreaking novels The Andromeda Strain, The Great Train Robbery, Jurassic Park, Disclosure, Prey, State of Fear, and Next, among many others. His books have sold more than 200 million copies worldwide, have been translated into thirty-eight languages, and have provided the basis for fifteen feature films. He was the director of Westworld, Coma, The Great Train Robbery and Looker, as well as the creator of ER. Crichton remains the only writer to have a number one book, movie, and TV show in the same year.