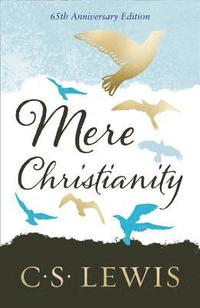 av C S Lewis
(3 röster)  |  Läs 1 recension
Inbunden Engelska, 2017-07-13
171
Köp
Spara som favorit
Finns även som
Visa alla 8 format & utgåvor
Special 65th Anniversary Edition One of the most popular and beloved introductions to the concept of faith ever written, 'Mere Christianity' has sold millions of copies worldwide. The book brings together C.S. Lewis's legendary radio broadcasts during the war years, in which he set out simply to 'explain and defend the belief that has been common to nearly all Christians at all times'. Rejecting the boundaries that divide Christianity's many denominations, Mere Christianity provides an unequalled opportunity for believers and nonbelievers alike to absorb a powerful, rational case for the Christian faith.
Visa hela texten

'He has quite a unique power for making theology an attractive, exciting and fascinating quest.' Times Literary Supplement 'Lewis seeks in Mere Christianity to help us see religion with fresh eyes, as a radical faith whose adherents might be likened to an underground group gathering in a war zone, a place where evil seems to have the upper hand, to hear messages of hope from the other side.' Kathleen Norris

Born in Ireland in 1898, Clive Staples Lewis gained a triple First at Oxford and was Fellow and Tutor at Magdalen College from 1925-54, where he was a contemporary of Tolkien. In 1954 he became Professor of Mediaeval and Renaissance Literature at Cambridge. C. S. Lewis was for many years an atheist, until his conversion, memorably described in his autobiography 'Surprised by Joy': "I gave in, and admitted that God was God ... perhaps the most dejected and reluctant convert in all England." He is celebrated for his famous series of children's books, the Narnia Chronicles (which have been filmed and broadcast many times), as well as his literary criticism and science fiction. C. S. Lewis died on 22nd November 1963.