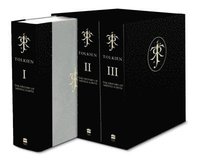 The Complete History of Middle-earth

av Christopher Tolkien
Inbunden Engelska, 2017-09-21
2129
Bevaka
Spara som favorit
Bokens leverantör håller tillfälligt stängt på grund av Coronapandemin. Klicka "Bevaka" för att få ett mejl när boken går att beställa igen.
This special collector's edition features all 12 parts of the series bound in three volumes. Each book includes a silk ribbon marker and is quarter-bound in black, with grey boards stamped in gold foil, and the set is presented in a matching black slipcase. J.R.R. Tolkien is famous the world over for his unique literary creation, exemplified in The Hobbit, The Lord of the Rings and The Silmarillion. What is less well known, however, is that he also produced a vast amount of further material that greatly expands upon the mythology and numerous stories of Middle-earth, and which gives added life to the thousand-year war between the Elves and the evil spirit Morgoth, and his terrifying lieutenant, Sauron. It was to this enormous task of literary construction that his Tolkien's youngest son and literary heir, Christopher, applied himself to produce the monumental and endlessly fascinating series of twelve books, The History of Middle-earth. This very special collector's edition brings together all twelve books into three hardback volumes - over 5,000 pages of fascinating Tolkien material - and places them in one matching box.
Visa hela texten

'One marvels anew at the depth, breadth and persistence of J.R.R. Tolkien's labour. No one sympathetic to his aims - the invention of a secondary universe - will want to miss this chance to be present at the creation.' Publishers Weekly

Christopher Tolkien, born on 21 November 1924, was the third son of J.R.R. Tolkien. During the Second World War he served in the Royal Air Force and the Fleet Air Arm as a pilot. At the end of the war he returned to Oxford University and became a Fellow and Tutor in English of New College in 1964, lecturing in the University on early English and northern literature. Appointed by J.R.R. Tolkien to be his literary executor, he devoted himself after his father's death in 1973 to the editing and publication of unpublished writings, notably The Silmarillion, Unfinished Tales, the twelve volumes collectively known as The History of Middle-earth, and The Children of Hurin, Beren and Luthien and The Fall of Gondolin. In 1975 he moved with his wife Baillie to live in France. He died in 2020 at the age of 95.