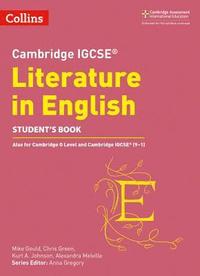 av Anna Gregory, Mike Gould, Alexandra Melville, Kurt A Johnson, Chris Green
Häftad Engelska, 2018-03-22
319
Köp
Spara som favorit
Help your students develop the skills and understanding to succeed in IGCSE (R) Literature in English. The Student Book provides an ideal companion to the Cambridge IGCSE (R) and IGCSE (R) (9-1) course for first examination in 2020, giving students the tools they need to tackle their own set texts in depth and tackle examinations with confidence. Exam Board: Cambridge Assessment International Education Level & Subject: IGCSE Literature in English (0475), IGCSE (9-1) Literature in English (0992) First teaching: September 2018 First examination: June 2020 This title is endorsed by Cambridge Assessment International Education. Build the fundamental skills and understanding: The first part of the book introduces the essential skills, concepts and terminology. The second part of the book shows students how to apply these skills to poetry, prose and drama. Help all students make good progress. Chapters move from teaching the underlying skills and concepts to asking students to apply them in passage-based, discursive and unseen tasks. Regular 'Check your progress' features help your classes to measure their progress, while annotated responses show them how to improve. Support all learners with clear differentiation. Introductory chapters build learners' confidence, the main chapters offer greater depth, while extension lessons help all students reach their full potential. Practical for the classroom: the book is clearly organised into lessons and packed with activity. Each two- or four-page section in our Student Book is supported by a double-page lesson plan in the Teacher Guide. Engage students with rich, varied, text extracts from a variety of periods and cultures. Texts representing the different genres in the syllabus allow students to compare writers' choices and their effects. Flexible for teachers: the clear book structure and lesson headings allow teachers to dip in to find lessons to build into their own schemes of work.
Visa hela texten

Anna Gregory is a former Head of English and currently a senior examiner for IGCSE English Literature with a leading awarding body. She has written textbooks for several GCSE specifications and trained teachers in the UK and around the world. Anna has 36 years of experience of examining at GCSE and IGCSE level and has been setting papers for 25 years. Mike Gould is a former Head of English and a university Lecturer in English and Education, who has written over 150 books for students and teachers in the UK and overseas. He advises schools and other organisations on educational policy and resources related to language, literacy and assessment. He has written print-based and digital materials for learners around the world. Chris Green is head of the English and drama faculty in a UK secondary school. He is also Principal Examiner for A-Level English Literature with a UK Awarding Body, a Trustee and Director of the British Shakespeare Association, and Director of Studies for the Cambridge Programmes summer schools. His other publications include a guide to managing a school English department. Alexandra Melville is a writer and educator. Formerly a Head of English, she has taught English at sixth form and secondary schools in London. She has examined for AQA GCSE English and has written educational resources for Fuel Theatre, the British Library and HarperCollins. Dr Kurt A. Johnson is an experienced teacher who has spent the last 13 years teaching English in Japan, the US and the UK at secondary and university level. He is currently Head of English at an independent school in Yorkshire. Over the last two years, Kurt has worked closely with a leading awarding body as an Assistant Examiner, Team Leader and Questioner for their IGCSE Literature specifications. He has also written and published numerous articles on Romantic and Modern Literature in academic journals and A-level magazines.