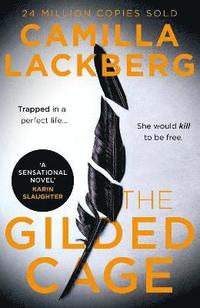 av Camilla Lackberg
Häftad Engelska, 2021-03-03
119
Bevaka
Spara som favorit
Ännu ej utkommen – klicka "Bevaka" för att få ett mejl så fort boken boken går att köpa.
Finns även som
Visa alla 6 format & utgåvor
'A sexy, sensational novel with intoxicating vengeance and an unexpected tenderness' No. 1 Sunday Times bestselling author Karin Slaughter All that glitters... People would kill to have Faye Adelheim's life. She lives in an ultra-swanky apartment in the most exclusive area of Stockholm, she has a gorgeous husband who gives her everything she's ever wanted, and she has an adorable daughter who lights up her world. Faye's life is perfect. So how is it, then, that she now finds herself in a police station? The truth is that Faye's life is far from what it seems. The truth is that Faye isn't even her real name. And now she's been caught out. There's no way she's going to go down without a fight. The only question is - who will escape with their life? A gripping new thriller that will keep you hooked from the first page to the last!
Visa hela texten

'A sexy, sensational novel with intoxicating vengeance and an unexpected tenderness - The Golden Cage is tensely and skillfully drawn' Karin Slaughter 'Lackberg's new embrace of a terrifying revenge scenario furnishes visceral psychological crime.' Financial Times 'The queen of Swedish noir' iNews 'Smart, unflinching... [a] novel of female empowerment and triumph over the patriarchy.' New York Times Book Review 'The Golden Cage is a fast-paced psychological thriller about betrayal, sex, money, and a scorned wife's revenge a la Gone Girl.' Buzzfeed 'Sexy, scandalous, and terrifying, this is the kind of suspense story you gobble up in one sitting.' Real Simple 'Insightful, addictive - and twisted!' In Touch 'A sexy, deliciously dark journey.' Los Angeles Times 'The doyenne of Swedish crime fiction serves up a propulsive tale... There's enough haute couture, Cava, and hot sex to sate a devotee of romance fiction, but the real satisfaction comes in watching our heroine reclaim her fierceness.' O Magazine 'Lackberg has made a career out of writing ingenious psychological suspense stories ... The Golden Cage tells a nasty tale about entrenched male domination in a supposedly enlightened society; great wealth and the soul rot it can breed; and the payback - oh, the sweet, sick payback of a woman used and spurned, rising up from the discard pile.' Washington Post "A fabulous, frothy novel." New York Post 'A twisty tale set squarely inside the world of the very rich and very fabulous." Glamour 'Sexy... exquisite... scorching... Lackberg reinforces her position as the thriller queen of Scandinavia.' Publishers Weekly

Camilla Lackberg is a worldwide bestseller renowned for her brilliant contemporary psychological thrillers. Her novels have sold over 20 million copies in 55 countries with translations into 37 languages.