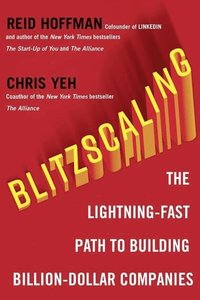 av Reid Hoffman, Chris Yeh
Häftad Engelska, 2018-10-18
179
Köp
Spara som favorit
Finns i lager! Skickas inom 1-2 vardagar.
Fri frakt inom Sverige för privatpersoner.
Finns även som
Visa alla 2 format & utgåvor
Foreword by Bill Gates From the authors of New York Times bestsellers, The Alliance and The Start-up of You, comes a smart and accessible must-have guide for budding entrepreneurs everywhere. Silicon Valley is renowned for its striking number of businesses which have grown from garage start-ups into global giants; Apple, Cisco, Google, HP and Intel to name a few. But what is the secret to their outstanding success? Hoffman and Yeh explain that it's simple: they've learnt how to blitzscale. Featuring case studies from numerous prominent tech businesses such as AirBnB and WeChat, this book offers a specific set of practices for catalysing and managing dizzying growth in bourgeoning start-ups. Prioritising speed over efficiency in an environment of uncertainty, Blitzscaling illustrates how businesses can accelerate to the stage in a company's life cycle where the most value is generated. Using the framework provided by Hoffman and Yeh, readers will learn how to design business models which simultaneously support growth at a furious pace and capture the market, as well as how to navigate the necessary shifts in strategy needed at each level of scale.
Visa hela texten

"The case studies you're about to explore and the tools you're about to gain have never been more relevant. This is an ideal moment to be reading this book." - Bill Gates "The book the start-up world has been waiting for. I can't think of any other that so perfectly captures the specific challenges - and opportunities - that a company faces at every stage of growth. This book shares some of the key secrets for building mission-oriented, global businesses at speed." - Brian Chesky, cofounder and CEO, AirBnb "Blitzscaling shows how companies can build value for customers and shareholders in the digital age. A compelling inside view of how the new economy is being built and is transforming global business." - Sheryl Sandberg, New York Times bestselling author of Lean In and Option B "The secret of Silicon Valley is that it keeps updating the playbook. Each new success - from Google to Facebook to Airbnb and Uber - develops new techniques for world-transforming products. Blitzscaling paints the picture, with key case studies, of what it really takes to build a market-leading company. If you want to learn how to manage growth amid the controlled chaos that has become the new normal for startups and legacy businesses alike, read this book." - Eric Schmidt, executive chairman and former CEO, Alphabet "This is the best book I've ever read on how to grow a company rapidly - and when that's even worth trying in the first place. With a rare combination of fresh insights, vivid cases, and actionable advice, it's a must-read for entrepreneurs and executives." - Adam Grant, New York Times bestselling author of Originals, Give and Take, and Option B with Sheryl Sandberg

Reid Hoffman is a partner at the leading VC firm Greylock Partners and an early investor in Facebook, Flickr, and Zynga. He co-founded LinkedIn in 2003; it now has more than 200 million members globally, and was acquired by Microsoft for $26 billion, the biggest acquisition in the tech giant's history. He serves on the boards of Airbnb, Convoy, Edmodo, and Microsoft and leads the Greylock Discovery Fund, which invests in seed-stage entrepreneurs and companies. He was previously a founding member and executive vice president at PayPal. A strong believer in the ability of entrepreneurship and technology to improve the world, he sits on the boards of Biohub, Kiva, Endeavor, and DoSomething.org. He earned his master's degree in philosophy from Oxford University as a Marshall Scholar, and his bachelor's degree from Stanford University. Chris Yeh is an entrepreneur, writer, and mentor. He earned two Bachelor's degrees with distinction from Stanford University and an MBA from Harvard Business School, where he was a Baker Scholar. He is the VP of Marketing at PBworks and general partner at Wasabi Ventures.