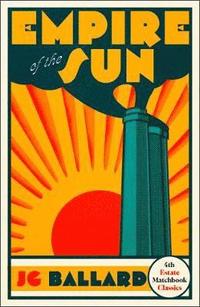 Empire of the Sun

av J G Ballard
Häftad Engelska, 2019-04-04
119
Köp
Spara som favorit
Skickas inom 5-8 vardagar.
Gratis frakt inom Sverige över 159 kr för privatpersoner.
Finns även som
Visa alla 6 format & utgåvor
The classic, heartrending story of a British boy's four year ordeal in a Japanese prison camp. One of the ten books - novels, memoirs and one very unusual biography - that make up our Matchbook Classics' series, a stunningly redesigned collection of some of the best loved titles on our backlist. Based on J. G. Ballard's own childhood, this is the extraordinary account of a boy's life in Japanese-occupied wartime Shanghai - a mesmerising, hypnotically compelling novel of war, of starvation and survival, of internment camps and death marches. It blends searing honesty with an almost hallucinatory vision of a world thrown utterly out of joint. Rooted as it is in the author's own disturbing experience of war in our time, it is one of a handful of novels by which the twentieth century will be not only remembered, but judged.
Visa hela texten

'An extraordinary achievement' Angela Carter 'A remarkable journey into the mind of a growing boy ... horror and humanity are blended into a unique and unforgettable fiction' Sunday Times 'Remarkable ... form, content and style fuse with complete success ... one of the great war novels of the 20th century' William Boyd 'Gripping and remarkable ... I have never read a novel which gave me a stronger sense of the blind helplessness of war ... unforgettable' Observer 'A brilliant fusion of history, autobiography and imaginative speculation. An incredible literary achievement and almost intolerably moving' Anthony Burgess

J. G. Ballard was born in 1930 in Shanghai. After internment in a civilian prison camp, his family returned to England in 1946. His 1984 bestseller 'Empire of the Sun' won the Guardian Fiction Prize and the James Tait Black Memorial Prize. His controversial novel 'Crash' was made into a film by David Cronenberg. His autobiography 'Miracles of Life' was published in 2008, and a collection of interviews with the author, 'Extreme Metaphors', was published in 2012. J. G. Ballard passed away in 2009.