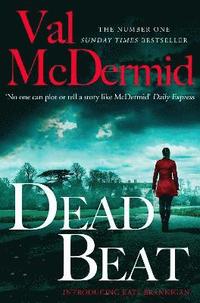 av Val McDermid
Häftad Engelska, 2019-11-14
109
Köp
Spara som favorit
Skickas inom 5-8 vardagar.
Gratis frakt inom Sverige över 159 kr för privatpersoner.
The stunning first novel in the Kate Brannigan series, from No.1 Sunday Times bestseller Val McDermid. 'This is crime writing of the very highest order' The Times Introducing Kate Brannigan, Manchester's most-loved private detective - a woman who won't take no for an answer. As a favour, Kate agrees to track down a missing songwriter, Moria Pollock. It was supposed to be a nice simple case, but the search soon leads Kate into the dark underworld of Leeds, Manchester and Bradford - and finally to a shocking confrontation with a killer...
Visa hela texten

'Solid pleasure... this moves along with the speed of a Porsche, so smooth you can almost kid yourself you haven't been sitting on the edge of your seat throughout' Mail on Sunday 'Zippy action, a well-crafted plot and some refreshingly gritty northern truths' The Times Praise for Val McDermid: 'No one rivals Val McDermid's skill at writing truly terrifying thrillers' Good Housekeeping 'The real mistress of psychological gripping thrillers' Daily Express 'McDermid's capacity to enter the warped mind of a deviant criminal is shiveringly convincing' The Times 'Val McDermid is undoubtedly the queen of British crime' Observer 'McDermid's expertly juggled plotlines and masterful handling of pace and tension tick all the best boxes' Guardian 'The queen of crime is still at the top of her game' Independent 'One of today's most accomplished crime writers' Literary Review 'Her writing is never less than excellent' Crime Time

Val McDermid is a No.1 bestseller whose novels have been translated into more than thirty languages, and have sold more than sixteen million copies. She has won many awards internationally, including the CWA Gold Dagger for best crime novel of the year and the LA Times Book of the Year Award. She was inducted into the ITV3 Crime Thriller Awards Hall of Fame in 2009, was the recipient of the CWA Cartier Diamond Dagger in 2010 and received the Lambda Literary Foundation Pioneer Award in 2011. In 2016, Val received the Outstanding Contribution to Crime Fiction Award at the Theakstons Old Peculier Crime Writing Festival. In 2017, she received the DIVA Literary Prize for Crime and was elected a Fellow of the Royal Society of Literature and the Royal Society of Edinburgh. She is also the patron of the Scottish Book Trust. Val writes full time and lives in Edinburgh and the East Neuk of Fife.