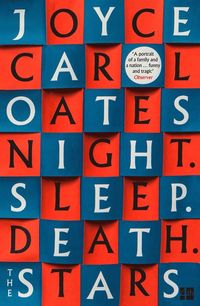 'This family saga is a thoughtful and spellbinding examination of grief, class, race and inequality that penetrates the darker psychological underbelly of contemporary American life, proving Oates to be at the top of her considerable game' Mail on Sunday 'Oates has become America's preeminent fiction writer ...There is great joy to be derived from the novel's submerged patterns, its mind-boggling fecundity, its gallimaufry of devices (stream of consciousness, analytic omniscience, sentences both snaking and staccato), its combination of intricacy and lucidity' New Yorker 'An immersive, discursive chronicle of a family's reconfiguration following the death of its patriarch ... There is much to relish in Night. Sleep. Death. The Stars., from its nimble pace to exuberant set pieces. As a portrait of a family and a nation, it's funny and tragic and sometimes bleak' Observer 'Though style and setting are very different, there are ways in which Oates recalls late Iris Murdoch novels. There is the same utter belief in what she is doing, the same extravagance and the same ability to persuade you to read on ... It holds the attention, rings true and gives pleasure. The subject - how you accommodate to loss - is real and important, and the characters have a credibility that is rare in much fashionable fiction' Scotsman 'John Earle "Whitey" McClaren pulls his car to the side of the expressway outside his hometown of Hammond, New York, when he witnesses police officers using excessive force on a Black man. The cops turn their Tasers and steel-toed boots on Whitey, leaving him writhing on the ground. His death catapults Jessalyn, his wife of more than 40 years, and his five grown children into the heartbreak of grief in all its stages. While Oates purposefully plumbs the depths of each family member's agonizing loss, her perceptive study of Jessalyn's widowhood stands out as an impressive and impassioned portrait of this distressing life journey' Booklist

Joyce Carol Oates is a recipient of the National Book Critics Circle Lifetime Achievement Award, the National Book Award and the PEN / Malamud Award, and has been nominated for the Pulitzer Prize. Her books include We Were the Mulvaneys, Blonde, Carthage, A Book of American Martyrs and Hazards of Time Travel. She is Professor of Humanities at Princeton University.