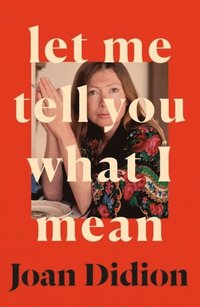 Let Me Tell You What I Mean

av Joan Didion
Inbunden Engelska, 2021-02-04
139
Köp
Spara som favorit
Finns även som
Visa alla 7 format & utgåvor
From one of our most iconic and influential writers: twelve pieces never before collected that offer an illuminating glimpse into the mind and process of this legendary figure. Mostly drawn from the earliest part of her astonishing five-decade career, Didion writes about a Gamblers Anonymous meeting, a visit to William Randolph Hearst's castle at San Simeon, a reunion of WWII veterans in Las Vegas, and about topics ranging from Nancy Reagan to Robert Mapplethorpe, Martha Stewart and Ernest Hemingway. With an Introduction by Hilton Als, this stunning collection reveals what would become her subjects: the press, politics, California robber barons, women, the act of writing, and her own self-doubt. Each piece is classic Didion: incisive, bemused, and stunningly prescient.
Visa hela texten

Praise for Let Me Tell You What I Mean: 'The peripheral, the specific, the tangible - or, as the writer Hilton Als notes in his foreword, "the Didion gaze", the penetrating prose of a reporter who writes with a scalpel - is by far the most compelling theme in Didion's latest collection of essays' Vogue 'The clarity of Didion's vision and the precision with which she sets it down do indeed feel uncanny ... Reading her now, she does seem prophetic, as manifested, for instance, in her concerns in 1968 about the weaknesses of the "traditional press", whose unspoken attitudes and "quite factitious 'objectivity'" come "between the page and the reader like so much marsh gas". Perhaps those iconic sunglasses were really X-ray specs' Independent 'Didion's dogged pursuit of the truth in her writing is more vital than ever in our era of fake news, echo chambers and political turmoil. This is an essential read that reminds us of her magic' i Paper 'The slighter these pieces are, the more remarkable they seem: they're so deft and enigmatic ... A sentence by Didion, whether it sticks to 39 characters or articulates possibilities in multiple dependent clauses, is always a marvel of magical thinking' Observer 'One of the most celebrated, influential and pioneering writers of the past 60 years. As the great chronicler of US cultural, societal and political movements, Didion's prose illuminates understanding of what connects and divides a nation ... It's a treat for Didion fans but also serves as an introduction to the writing that would become legendary' Irish Times 'A valuable addition to the literature of self-doubt and self-awareness, an elegant untangling of what and why we remember and forget' Francesca Wade, Guardian 'Astute and filled with her trademark wit and wistfulness, it's a grown-up delight' Stylist

JOAN DIDION is the author of five novels, ten books of nonfiction, and a play. Her book, The Year of Magical Thinking, won the National Book Award in 2005. She lives in New York. HILTON ALS is the author of The Women and White Girls. He is a staff writer for The New Yorker and teaches at Columbia University.