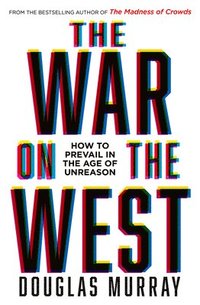 The War on the West

How to Prevail in the Age of Unreason

av Douglas Murray
Inbunden Engelska, 2022-04-28
259
Köp
Spara som favorit
Finns även som
Visa alla 1 format & utgåvor
SUNDAY TIMES NUMBER ONE BESTSELLER 'The most important book of the year' Daily Mail The brilliant and provocative new book from one of the world's foremost political writers 'The anti-Western revisionists have been out in force in recent years. It is high time that we revise them in turn...' In The War on the West, international bestselling author Douglas Murray asks: if the history of humankind is one of slavery, conquest, prejudice, genocide and exploitation, why are only Western nations taking the blame for it? It's become perfectly acceptable to celebrate the contributions of non-Western cultures, but discussing their flaws and crimes is called hate speech. What's more it has become acceptable to discuss the flaws and crimes of Western culture, but celebrating their contributions is also called hate speech. Some of this is a much-needed reckoning; however, some is part of a larger international attack on reason, democracy, science, progress and the citizens of the West by dishonest scholars, hatemongers, hostile nations and human-rights abusers hoping to distract from their ongoing villainy. In The War on the West, Douglas Murray shows the ways in which many well-meaning people have been lured into polarisation by lies, and shows how far the world's most crucial political debates have been hijacked across Europe and America. Propelled by an incisive deconstruction of inconsistent arguments and hypocritical activism, The War on the West is an essential and urgent polemic that cements Murray's status as one of the world's foremost political writers.
Visa hela texten

'Murray shows not just how every aspect of western society has come under the iconoclasts' gaze - from mathematics to music, Kew Gardens to Jane Austen - but how flimsy their case often is.' - The Sunday Times 'Murray writes with wonderful lucidity about the many fronts on which the West is waging war against itself. And he writes with a sense of urgency.' - Real Clear Politics 'Well executed... a spirited defence against the Left's assault on the Western tradition.' - The Daily Telegraph 'The War on the West is a monumental book leading to several pivotal realisations.' - Lotus Eaters 'Meticulous, measured... The War on the West is Douglas Murray's latest blast against loony left wokery.' - The Spectator Praise for Douglas Murray and The Madness of Crowds 'Whether one agrees with him or not, Douglas Murray is one of the most important public intellectuals today.' - Bernard-Henry Levy 'This is an author who specialises in expressing what everyone sort of knows already and is afraid to say...Well argued, well supported, and well observed.' - Lionel Shriver 'Simply brilliant. Reading it to the end, I felt as though I'd just drawn my first full breath in years. At a moment of collective madness, there is nothing more refreshing - or indeed, provocative - than sanity.' - Sam Harris 'His latest book is beyond brilliant and should be read, must be read, by everyone. He mercilessly exposes the hypocrisy and embarrassingly blatant contradictions that run rife through the current 'woke' vouge.' - Richard Dawkins 'Douglas Murray fights the good fight for freedom of speech... A truthful look at today's most divisive issues.' - Jordan B. Peterson 'Extraordinary. Magnificent. Searing. Necessary. I salute il miglior fabbro. 'And whether they listen or fail to listen... they will know that the prophet has been among them' (Ezekiel 2:5)' - Rabbi Lord Jonathan Sacks

Douglas Murray is a bestselling author and journalist. His books include the Sunday Times No. 1 bestseller The Strange Death of Europe: Immigration, Identity and Islam and The Madness of Crowds: Gender, Race and Identity. He has been Associate Editor at The Spectator magazine since 2012 and has written regularly there, as well as for other publications including The Wall Street Journal, The Times, The Sunday Times, The Sun, The Mail on Sunday and National Review. A regular guest on the BBC and other news channels, he has also spoken at numerous universities, parliaments, the O2 Arena and the White House.