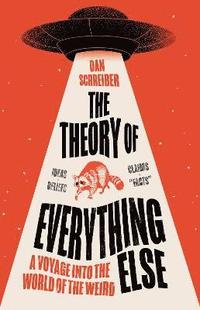 The Theory of Everything Else

av Dan Schreiber
Inbunden Engelska, 2022-10-13
219
Köp
Spara som favorit
Finns även som
Visa alla 4 format & utgåvor
This is not a book of facts; it's a book of 'facts'. Should you finish it believing we became the planet's dominant species because predators found us too smelly to eat; or that the living bloodline of Christ is a family of Japanese garlic farmers - well, that's on you. Why are we here? Do ghosts exist? Did life on Earth begin after a badly tidied-up picnic? Was it just an iceberg that sank the Titanic? Are authors stealing their plotlines from the future? Will we ever talk to animals? And why, when you're in the shower, does the shower curtain always billow in towards you? We don't know the answers to any of these questions. But don't worry, no matter what questions you have, you can bet on the fact that there is someone (or something) out there, investigating it on your behalf. From the sports stars who use cosmic energy to office plants investigating murders, The Theory of Everything Else will act as a handbook for those who want to think differently.
Visa hela texten

Dan Schreiber is an author, podcaster and presenter who has made a career out of combining interesting facts with comedy. He is the co-host of the UK's most streamed podcast, No Such Thing As A Fish, which has been downloaded over 400 million times. He also co-hosts The Cryptid Factor podcast, and is co-creator of the Rose d'Or award-winning BBC Radio 4 panel show The Museum of Curiosity. He lives in London and has no idea what he believes anymore.