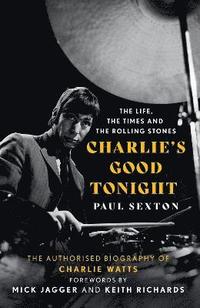 The Authorised Biography of Charlie Watts

av Paul Sexton
Inbunden Engelska, 2022-09-15
279
Köp
Spara som favorit
Finns även som
Visa alla 1 format & utgåvor
Featuring forewords from bandmates Mick Jagger and Keith Richards, this is the official and fully authorised biography of the world's most revered and celebrated drummer. Mid-1962. The newly formed Rolling Stones are on the hunt for a permanent drummer. Their sights are set on Charlie Watts, a jazz musician already well-known within London's rhythm and blues clubs. Fortunately for future Stones fans the world over, they persuade him to take on the job. Once installed at the drum seat, Charlie would not miss a beat for the rest of his life. He was there throughout the swinging sixties as the Stones reached superstardom and for the well-documented debauchery of the 1970s, typified by the iconic album Exile on Main St. Battling his own demons by the eighties, Charlie emerged unscathed, cementing his reputation as the thoughtful, cultured but no less compelling counterpoint to his more raucous bandmates. For almost 60 years - through all the band bust-ups, bereavements and changes in personnel both on stage and off - Charlie remained the rock at the heart of the Rolling Stones. At the same time, he was the antithesis of the rock-star archetype, an intensely private man who valued his family above all else. Drawing on new interviews with his family, friends and former bandmates - including Mick Jagger and Keith Richards - Charlie's Good Tonight is the remarkable life story of Charlie Watts: official, authorised and as it's never been told before.
Visa hela texten

'An affectionate portrait, one that recognises Watts as musician, colleague, family man, obsessive collector and immaculate dresser.' - The Sunday Times 'Sexton, a longtime Stones chronicler, tells Watts's story with warmth and diligence' - The Observer 'Exhaustively researched... crammed with telling incidental information' - The Telegraph 'A book as gentle, fascinating and companionable as the man himself' - Mojo 'Favours substance over flash, presenting an affectionate account of a devoted family man and friend, a particularly British type of eccentric, who just happened to play drums for the Rolling Stones.' - Irish Independent

Paul Sexton is an author, journalist and broadcaster who has covered The Rolling Stones, and interviewed all of the band extensively, for some 30 years. He started writing about music for the weekly pop paper Record Mirror while still a teenager in 1977, and his work has appeared in all of the quality UK press, most notably The Sunday Times and The Times, as well as in Billboard magazine and countless documentaries and shows for BBC Radio 2. His book Prince: A Portrait of the Artist in Music and Memorabilia was published in 2021. He lives in south London.