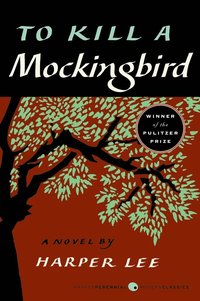 To Kill A Mockingbird

Bloggat om To Kill A Mockingbird

Harper Lee was born in 1926 in Monroeville, Alabama, where she attended local schools and the University of Alabama. She has been awarded the Pulitzer Prize, three honarary degrees, and many other literart awards.

This has been voted the book adults should read before they die. The survey of librarians to mark World Book Day 2006 came out in favour of The Bible in second place and The Lord of the Rings trilogy in third place. The timeless classic of growing up and the human dignity that unites us all. The unforgettable novel of a childhood in a sleepy Southern town and the crisis of conscience that rocked it, To Kill a Mockingbird became both an instant bestseller and a critical success when it was first published in 1960. It went on to win the Pulitzer prize in 1961 and was later made into an Academy Award winning film, also a classic. Compassion, dramatic, and deeply moving, To Kill a Mockingbird takes readers to the roots of human behavior¿to innocence and experience, kindness and cruelty, love and hatred, humor and pathos. Now with over 15 million copies in print and translated into ten languages, this regional story by a young Alabama woman claims universal appeal. Harper Lee always considered her book to be a simple love story. Today it is regarded as a masterpiece of American literature.